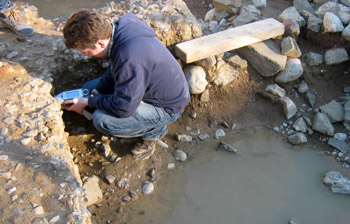 Researchers at the University of Sheffield have developed a method of sourcing obsidian artefacts that takes only 10 seconds – dozens of times faster than the current methods – with a handheld instrument that can be used at archaeological excavations.

The chemistry of obsidian varies from volcano to volcano, and the chemical “fingerprints” allow researchers to match an obsidian artefact to the volcanic origin of its raw material. The chemical tests often involve dedicated analytical laboratories, even nuclear reactors, and take place months or years after an archaeological site has been excavated.

The new process uses an analytical technique called portable X-ray fluorescence (pXRF), which involves a handheld instrument about the size, shape, and weight of a cordless drill. This portability enables archaeologists to identify the origins of stone tools in the field rather than having to send off artefacts to a distant lab. The newly developed method, which saves time and money, will first be used to study obsidian tools made by early humans, including Neanderthals and Homo erectus, tens of thousands of years ago.

Dr Ellery Frahm from the University of Sheffield’s Department of Archaeology explained: “Obsidian sourcing has, for the last 50 years, involved chemical analysis in a distant laboratory, often taking five minutes per artefact, completely separate from the process of archaeological excavation. We sought to bring new tools for chemical analysis with us into the field, so we can do obsidian sourcing as we excavate or survey an archaeological site, not wait until months or years later to learn the results. We can now analyse an obsidian artefact in the field, and just 10 seconds later, we have an answer for its origin.

“We carried out the research in Armenia because it has one of the most obsidian-rich natural and cultural landscapes in the world, and the lithic assemblages of numerous Palaeolithic sites are predominantly, if not entirely, composed of obsidian.”

The work is the latest of Dr Frahm’s achievements in the field of obsidian sourcing, an area that he previously researched in Syria, prior to the current conflict situation which now threatens the country’s heritage.

This research arose from the department’s involvement in the EU-funded Marie Curie network “New Archaeological Research Network for Integrating Approaches to Ancient Material Studies,” known by its acronym as NARNIA. Dr Frahm explained that Sheffield’s research with NARNIA includes uniting archaeological labwork and fieldwork in the field: “We have a broad remit on the project, but we are driven by two goals: work where we couldn’t work before, and answer what we couldn’t answer before.”

Dr Frahm continued: “Here at Sheffield we’re shifting chemical analysis from the realm of ‘white lab coats’ to ‘muddy boots.’ The more that archaeologists and specialists in various fields can work together on-site the better.”

Link to the paper in Science Direct