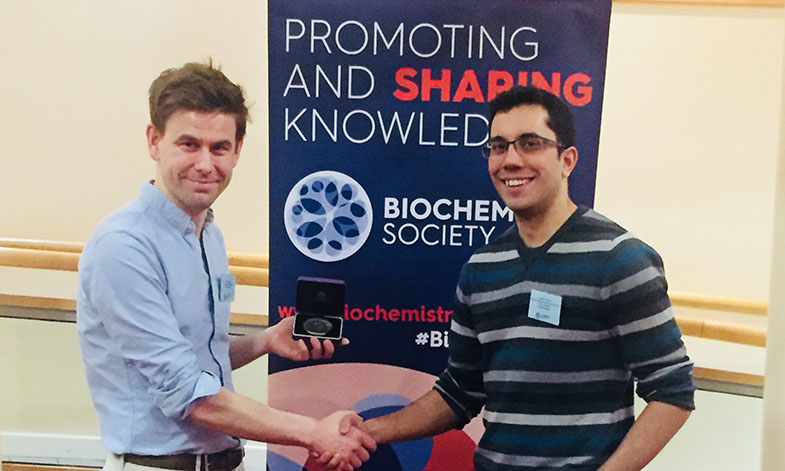 An academic from the University of Sheffield has been honoured with the Biochemical Society’s Colworth Medal for their outstanding research.

Dr Matt Johnson from the Department of Molecular Biology and Biotechnology at the University of Sheffield has been awarded the 2018 Colworth Medal, the most distinguished award a biochemical researcher can receive in the early stages of their independent research in the UK.

The medal was awarded in recognition of Dr Johnson’s exceptional and sustained contributions to the field of photosynthesis, in particular for his research into understanding how plants maximise the utilisation of sunlight when it is scarce and protect themselves from sunburn when it is in excess.

The discoveries made by Dr Johnson in this area are feeding into a global scientific effort to improve the efficiency of photosynthesis to increase crop yields, a necessity to achieve the 50-70 per cent increase in production that will be required to feed a global population of nine billion by 2050.

The Biochemical Society’s awards recognise scientists who have made a big impact on the scientific community and society at large through their work. Donated in 1963 by Unilever Research Colworth Laboratory, the inaugural winner of the Colworth Medal was University of Sheffield alumnus Sir Hans Kornberg FRS.

Dr Johnson said: “I’d like to thank the Biochemical Society for awarding me this prestigious honour. It is incredibly humbling to be recognised alongside the many great scientists who have previously won the award, including Sir Hans Kornberg, a personal scientific hero of mine.

“I would also like to acknowledge the inspirational senior scientists who have mentored me and the hardworking students who have supported my work. Without their encouragement and dedication this achievement wouldn’t have been possible.”

The Department of Molecular Biology and Biotechnology is focussed on studying DNA, RNA and proteins, and how they affect biological function. Researchers work on topics from genomics and nucleic acids to plants and photosynthesis, with the aim of addressing the major global challenges of food security, antimicrobial resistance and an aging population.

Many of its scientists are following in the footsteps of Sir Hans Krebs, the department’s first Professor of Biochemistry, who was awarded the Nobel Prize in Physiology or Medicine in 1953.

The department was placed in the UK top five for biological research and number one for biomedical research in the last Research Excellence Framework.