● Research shows that patients requiring emergency heart attack treatment also benefit from further intervention to reduce risk of future heart attacks
● The international trial included 4000 patients, 713 of which were from the UK in investigations led by the University of Sheffield
● The study shows that further stenting for additional arteries should be the standard treatment for heart attack patients whenever feasible 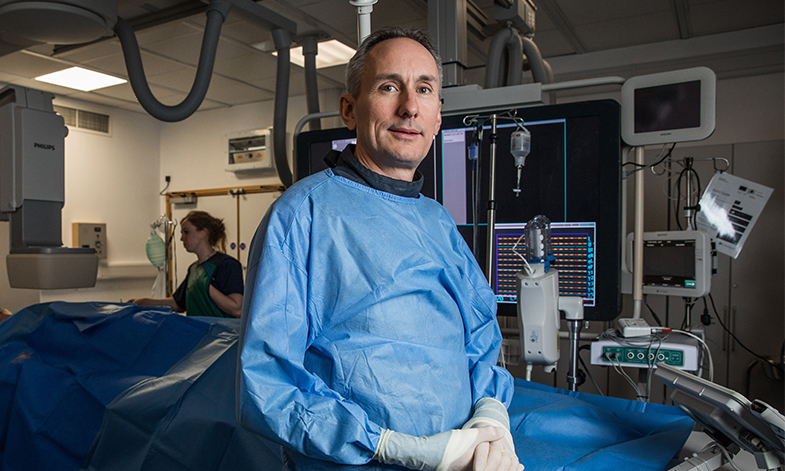 Research has shown that patients who have had emergency heart attack treatment with heart artery stenting - and have significant narrowings in their other untreated arteries - can benefit from additional stenting to help prevent future heart attacks.

A stent is a tiny mesh tube that is inserted into affected, or clogged, arteries and expands to keep them open, reducing the chance of further heart attacks by allowing the blood to flow more freely around the heart.

The results of the COMPLETE study, presented at the European Society of Cardiology meeting in Paris in September 2019 and simultaneously published in the New England Journal of Medicine, showed that patients who underwent routine additional stenting had a lower risk of further heart attacks or heart-related death, compared to those who had just usual tablet treatment for managing the untreated narrowings (7.8 per cent versus 10.5 per cent over five years). They also had less than one-fifth the risk of needing further emergency treatment for their heart arteries in the future.

As part of the international clinical trial of over 4000 patients, additional analysis of the study has been presented at the Transcatheter Cardiovascular Therapeutics (TCT 2019) meeting in San Francisco (Saturday 28 September 2019), looking at whether timing of the second stenting procedure - either during the same hospital admission or as a later outpatient procedure - was important in achieving the beneficial effects.

Similar benefits were seen regardless of whether the second procedure was performed as an in-patient or within six weeks as an outpatient.

Over 700 UK patients took part in the UK investigations led by Rob Storey, Professor of Cardiology at the University of Sheffield and Academic Director and Honorary Consultant Cardiologist in the Cardiology and Cardiothoracic Surgery Directorate at Sheffield Teaching Hospitals NHS Foundation Trust.

Professor Storey, who was also a member of the executive team running the study, said: “We have made huge strides in the treatment of heart attack over the last 20 years with the development of new drugs and new stents continuously improving the effectiveness of heart artery stenting. For example, in Sheffield we have led the way in the development of ticagrelor, which has markedly reduced the risk of stent blockage and further heart attack, and this is now a standard treatment for heart attack around the world.”

One of the questions that had remained unanswered until now was whether or not patients with significant narrowings elsewhere in their main heart arteries benefit from additional routine stenting of these narrowings immediately after they have had emergency treatment to open a blocked heart artery.

“The COMPLETE study answers this question emphatically, showing that further stenting should be the standard treatment for these patients whenever feasible,” Professor Storey added.

“The results of our additional analysis shows that the dominant UK practice of bringing patients back as an outpatient for their second procedure was just as beneficial as performing the second procedure in hospital at the time of the initial hospital admission, since the benefits accrued over many years.

“So this strategy fits very well with UK best practice, since patients can return within a month or so for an outpatient stenting procedure and still receive the same benefit compared to staying in hospital as an inpatient longer after their heart attack for the second procedure. This marks another milestone in the relentless progress towards improving the long-term outlook of heart attack patients.”

● The COMPLETE study was set up and coordinated by the Population Health Research Institute (PHRI) of Hamilton Health Sciences and McMaster University, Ontario, Canada.

● Across the world, 31 countries participated and recruited patients into the study, which was funded by the Canadian Institutes of Health Research, with additional support from AstraZeneca, Boston Scientific, and the PHRI.