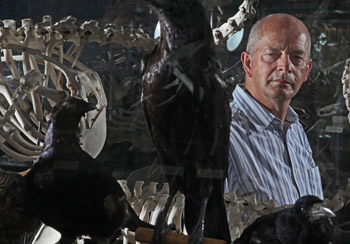 The University of Sheffield’s ‘secret’ natural history museum is set to open on a regular basis, following the huge success of granting public access for the first time during Festival of the Mind last year (20-30 September 2012).

TV bird expert and animal behaviour specialist Professor Tim Birkhead opened the doors of the little-known Alfred Denny Museum to the public for the first time in over a century for a series of guided tours during the festival.

This teaching museum was created by the University’s first Professor of Biology, Alfred Denny in 1905. Last year, visitors to the museum flocked in their hundreds to see some of the museum’s weird and wonderful artefacts, including the enormous skull of an extinct man-sized eagle – known as the ‘Terror Bird’.

Following massive public interest, Professor Birkhead has secured funding to open the museum to the public on the first Saturday of every month from this weekend (Saturday 2 February) between 9.30 – 1pm.

Alongside the Terror Bird, exhibits also on display include a half porpoise, fossilised tiny flying dinosaurs, and Sun Spiders with their ferocious, poisonous jaws.

The intriguing collection, which is a working study museum for students in the Department of Animal and Plant Sciences, will be manned by volunteers during public access.

One such volunteer, Duncan Jackson, 19, said: "Having the museum in the department really helped with my course work. I would like a career working with zoology collections in museums so having the opportunity to get some experience as a volunteer in the Alfred Denny Museum will really help."

A visitor during Festival of the Mind signed the visitor book saying: “What a hidden treasure. It has been a real privilege to be allowed to see it. It was a surprise how extensive the collection is, and how instructive. What an amazing collection. Reminds me of Pitt-Rivers Museum in Oxford.”

Professor Birkhead said: “The public’s enthusiasm for the museum has been inspirational. We’re thrilled to be able to open up the museum for everyone. We’re so pleased that the public are eager to learn more about the amazing world of nature and there’s no better place to start than here at the Alfred Denny Museum.”

Professor Vanessa Toulmin, who curated and directed Festival of the Mind, said: "The fact that the Alfred Denny Museum, or the 'Cabinet of Curiosities' as it was known during Festival of the Mind, will now be regularly open to the public is fantastic. This has come about due to the overwhelming public demand during the festival. It shows just how much of an appetite the people of Sheffield have to learn about the fascinating work that goes on at the University."

The Alfred Denny Museum is located at the Department of Animal and Plant Sciences at the University of Sheffield.