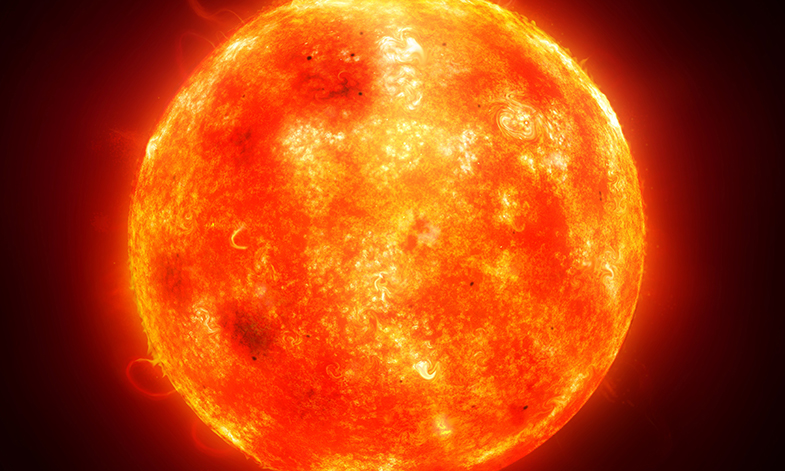 An international team of scientists led by the University of Sheffield have discovered previously undetected observational evidence of frequent energetic wave pulses the size of the UK, transporting energy from the solar surface to the higher solar atmosphere.

Magnetic plasma waves and pulses have been widely suggested as one of the key mechanisms which could answer the long-standing question of why the temperature of the solar atmosphere rises dramatically, from thousands to millions of degrees, as you move away from the solar surface.

There have been many theories put forward, including some developed at the University of Sheffield – for example, heating the plasma by magnetic waves or magnetic plasma – but observational validation of the ubiquity of a suitable energy transport mechanism has proved challenging until now.

By developing innovative approaches, applied mathematicians at the Solar Physics and Space Plasma Research Centre (SP2RC) in the School of Mathematics and Statistics at the University of Sheffield, and the University of Science and Technology of China, have discovered unique observational evidence of plentiful energetic wave pulses, named after the Nobel laureate Hannes Alfvén, in the solar atmosphere.

These short-lived Alfvén pulses have been found to be generated by prevalent photospheric plasma swirls about the size of the British Isles, which are suggested to have a population of at least 150,000 in the solar photosphere at any moment of time.

Professor Robertus Erdélyi (a.k.a. von Fáy-Siebenbürgen), Head of SP2RC, said: “Swirling motions are everywhere in the universe, from sinking water in domestic taps with a size of centimeters, to tornadoes on Earth and on the Sun, solar jets and spiral galaxies with a size of up to 520,000 light years. This work has shown, for the first time, the observational evidence that ubiquitous swirls in the solar atmosphere could generate short-lived Alfvén pulses.

“The generated Alfvén pulses easily penetrate the solar atmosphere along cylinder-like magnetic flux tubes, a form of magnetism a bit like trees in a forest. The pulses could travel all the way upward and reach the top of the solar chromospheric layers, or, even beyond.”

Alfvén modes are currently very hard to observe directly, because they do not cause any local intensity concentrations or rarefactions as they make their journey through a magnetised plasma. They are hard to be observationally distinguished from some other types of magnetic plasma modes, like the well-known transversal magnetic plasma waves, often called kink modes.

“The energy flux carried by the Alfvén pulses we detected now are estimated to be more than 10 times higher than that needed for heating the local upper solar chromosphere,” said Dr Jiajia Liu, postdoctoral research associate.

“The chromosphere is a relatively thin layer between the solar surface and the extremely hot corona. The solar chromosphere appears as a red ring around the Sun during total solar eclipses.”

Professor Erdélyi added: “It has been a fascinating question for the scientific community for a long while – how the Sun and many other stars supply energy and mass to their upper atmospheres. Our results, as part of an exciting UK-China collaboration, involving our very best early-career scientists like Drs Jiajia Liu, Chris Nelson and Ben Snow, are an important step forward in addressing the supply of the needed non-thermal energy for solar and astrophysical plasma heating.

“We believe, these UK-sized photospheric magnetic plasma swirls are also very promising candidates not just for energy but also for mass transportation between the lower and upper layers of the solar atmosphere. Our future research with my colleagues at SP2RC will now focus on this new puzzle. ”

Read the research in Nature Communications 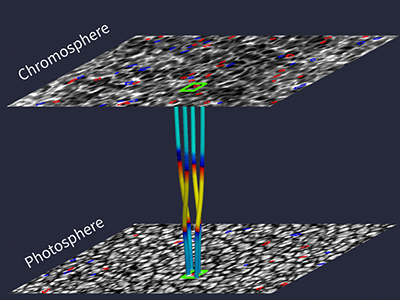 Illustration of the Alfvén pulse connection between plasma swirls observed in the solar photosphere and chromosphere. The photospheric and chromospheric images were recorded with the Hinode satellite, while coloured lines between are visualizing the presence of magnetic field lines from our realistic numerical simulations using the Sheffield Advanced Code (SAC). Red and blue curves are swirls detected by the Automated Swirl Detection Algorithm (ASDA) developed by us.
Credits: Liu et al. Nature Communications, 10:3504, 2019 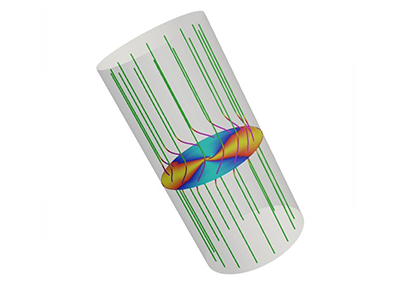 The grey cylinder represents a magnetic flux tube while green lines are magnetic field lines. Regions with the purple color in the field lines highlight the location of the propagating magnetic Alfvén pulse. Different colours on the central disk represent different local plasma densities. The figure illustrates how a magnetic Alfvén plasma pulse will show up as the observed chromospheric swirls. An online animation of this figure is available.
Credits: Liu et al. Nature Communications, 10:3504, 2019