University of Sheffield alumna and the first Briton to go into space Dr Helen Sharman OBE has been appointed as the new President of the Institute of Science & Technology (IST). 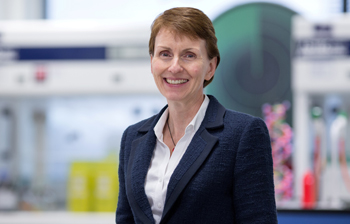 In 1991, aged just 27, Helen was selected as the successful candidate for the Anglo-Soviet Project Juno mission after initially responding to a radio advertisement asking for applicants to be the first British astronaut. After undertaking 18 months training Helen was selected as the first Briton to go into space. Until then, Helen worked in industry as an engineer and chemist for GEC and Mars Confectionery.

Helen was born and raised in Grenoside in Sheffield. She studied for a BSc in Chemistry at the University, graduating in 1984.

Helen has become a leading ambassador for science and in 1993 was appointed an OBE for her pioneering accomplishments.

She has also overseen a range of specialist facilities and laboratories used for teaching and research, and recently joined Imperial College London’s Department of Chemistry as Operations Manager.

In her new role at the IST – the professional body for specialist, technical and managerial staff – Helen will be working closely with the University of Sheffield’s Terry Croft MBE. Terry is the current Chair of the IST and Director of Technical Development and Modernisation at the University.

Like Helen, Terry also has a degree in Chemistry. He was named in the New Years Honours List the year before Helen, in 1992, when he was given an MBE for services to humanity after he rescued an academic colleague and his family from the violence occurring in Iraq, for which he was also awarded the Chancellor’s Medal.

Helen said: “I am delighted to be appointed as the new President of the IST. I am aware of the important role played by technical staff, after having worked in technical and managerial positions in a range of industries, and am looking forward to working with the chairman Terry Croft to further highlight the positive impact of these roles.”

Terry said: “I am looking forward to working with Helen – especially given our connections with the University and the parallels within our own careers – and using our combined experience to move forward with the IST’s aim to support the needs of specialist, technical, and managerial staff.”

Vice Chancellor of the University of Sheffield, Professor Sir Keith Burnett, said: "I am delighted to be able to congratulate Helen Sharman on her new role as President of the Institute of Science and Technology. There could be no better champion for this vital work which is so essential to the future of British science.

"We are of course deeply proud that Helen Sharman is one of our University of Sheffield graduates. She is a true pioneer and a true inspiration, who will now open the way for others to enjoy rewarding and meaningful scientific careers.”

The University of Sheffield
With almost 26,000 of the brightest students from around 120 countries, learning alongside over 1,200 of the best academics from across the globe, the University of Sheffield is one of the world’s leading universities.
A member of the UK’s prestigious Russell Group of leading research-led institutions, Sheffield offers world-class teaching and research excellence across a wide range of disciplines.
Unified by the power of discovery and understanding, staff and students at the university are committed to finding new ways to transform the world we live in.
In 2014 it was voted number one university in the UK for Student Experience by Times Higher Education and in the last decade has won four Queen’s Anniversary Prizes in recognition of the outstanding contribution to the United Kingdom’s intellectual, economic, cultural and social life.
Sheffield has five Nobel Prize winners among former staff and students and its alumni go on to hold positions of great responsibility and influence all over the world, making significant contributions in their chosen fields.
Global research partners and clients include Boeing, Rolls-Royce, Unilever, AstraZeneca, Glaxo SmithKline, Siemens and Airbus, as well as many UK and overseas government agencies and charitable foundations.
For further information, please visit www.sheffield.ac.uk