The UK's first ever University-based Apprentice Awards event was held last night (11 March 2015) at the University of Sheffield.

Sponsored by Boeing, and drawing guests from a number of companies, the prestigious awards dinner recognised the achievements of talented apprentices at the Advanced Manufacturing Training Centre. 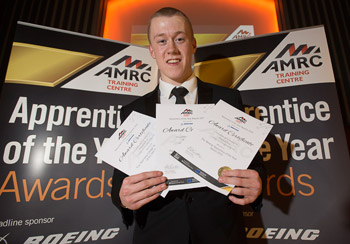 The black tie event, attended by 200 guests, celebrated the Centre’s 400-strong apprentice cohort, honouring the best of the best with 11 awards.

The top award of the night, presented by the Managing Director of Boeing UK, went to 17-year-old apprentice Russell Fox from Sheffield-based automotive tools specialist Eldon Tools who was named the AMRC Training Centre’s Boeing Apprentice of the Year. Russell wins the trip of a lifetime to Boeing’s headquarters in Seattle, where he will see the aerospace giant’s new Dreamliner being made.

Russell applied for an apprenticeship at the AMRC Training Centre after completing his GCSEs.

He said: “I have really enjoyed the freedom to learn that the Training Centre has given me. This has been reflected in my academic achievements this year. I am now keen to progress on to a foundation degree.”

A total of 11 awards from industry sponsors were presented at the celebration dinner, held at Firth Hall, where Yorkshire-born David Pitchforth, Managing Director of Boeing Defence UK, was keynote speaker.

Mr Pitchforth told apprentices and guests: “As a former apprentice myself, I am delighted to be here today; the values, skills and knowledge that you learn here will – believe me – stand you in good stead for the rest of your lives.

“Tonight we are recognising achievement, innovation, fresh thinking, raising standards and awareness, values that all of us at Boeing hold dear to our hearts.”

According to the Vice-Chancellor Professor Sir Keith Burnett, the awards event is far more than simply a celebration of the achievements of young people.

“I am deeply proud of the achievements of our apprentices and those who train and mentor them. The UK desperately needs skilled engineers to help create productivity and growth. Companies are constantly reminding us that the biggest barrier they face to investment or expansion is ensuring that there are adequate skills.

"There is a lot of talk about 'quality' apprenticeships and this really is the gold standard. Our AMRC advanced apprentices work in the leading manufacturing research environment in the UK. They are part of a university but also cutting-edge industrial practises. We have seen for ourselves how they are thriving, and we are now extending apprentice-level study into a world-class manufacturing engineering degree which retains the same deep level of industrial partnership for which our University and AMRC are rightly famous."

About the AMRC Training Centre