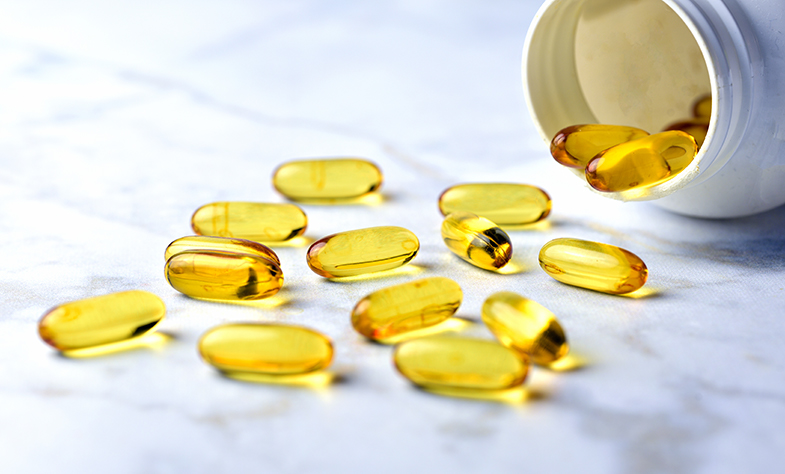 Both aspirin and a purified omega-3 called EPA (eicosapentaenoic acid) reduce the number of pre-cancerous polyps in patients found to be at high risk of developing bowel cancer, according to new research.

A clinical trial, led by the University of Leeds in collaboration with researchers from the University of Sheffield, found that both aspirin and EPA reduced the number of bowel polyps in patients one year on from a screening colonoscopy (large bowel camera test), although they did not reduce the chances of an individual having any polyps present in the bowel.

Patients who took aspirin developed fewer polyps overall, including on the right side of the large bowel, the part which is most difficult to monitor by colonoscopy.

Patients who took purified omega-3 EPA also developed fewer polyps, but this effect was seen only on polyps on the left side of the bowel, which is nearest the back-passage.

The seAFOod Trial, the result of a multidisciplinary collaboration between the Universities of Leeds, Sheffield, Nottingham, Bradford and Newcastle, is published in The Lancet.

The trial was launched to determine whether aspirin or EPA could reduce the number of people who had any polyps at their one year follow up test, which they did not. However, both compounds had preventative effects by reducing the number of polyps of specific types in patients.

Colorectal (bowel) cancer is the third most common cancer worldwide and there is strong evidence that diet and lifestyle can modify the risk of developing the disease.

Dr Elizabeth Williams from the University of Sheffield’s Department of Oncology and Metabolism, said: “Colorectal (bowel) cancer is the third most common cancer worldwide and there is strong evidence that diet and lifestyle can modify the risk of developing the disease.

“The seAFOod trial demonstrates the potential of both aspirin and the polyunsaturated fatty acid, EPA (eicosapentaenoic acid), to reduce the number of pre-cancerous lesions in people at high risk of developing bowel cancer.

“As a nutritionist I am keen to explore ways to reduce cancer risk through diet. Further research is now needed to decipher the biological mechanisms underlying the apparent benefit of aspirin and EPA. I am delighted to have been involved in this exciting research funded by the MRC/NIHR and led by Professor Mark Hull at the University of Leeds.”

Bowel cancer remains the second largest cause of cancer deaths in the UK. Despite a national screening programme, bowel cancer still resulted in over 16,000 deaths in England and Wales in 2014.

People at high risk of the disease are regularly monitored by specialists who use a flexible camera to examine the lining of the large bowel, also called the colon, by a technique called colonoscopy.

During a colonoscopy, a specialist looks for polyps, which are fleshy growths on the lining of the colon. The growths are usually benign but they can turn cancerous and so they are removed. However, colonoscopy is not fool-proof and a significant number of people still continue to develop bowel cancer.

Lead author Mark Hull, Professor of Molecular Gastroenterology at the University of Leeds, said: “The seAFOod Trial demonstrates that both aspirin and EPA have preventative effects, which is particularly exciting given that they are both relatively cheap and safe compounds to give to patients.

“Given this new evidence, clinicians need to consider these agents for patients at elevated risk of bowel cancer, alongside regular colonoscopy surveillance.”

The seAFOod Trial, funded by the EME Programme - a Medical Research Council (MRC) and National Institute for Health Research (NIHR) partnership - was conducted to see if aspirin and EPA could provide another layer of prevention, alongside colonoscopy.

Professor Hull is a practising Gastroenterologist at the Leeds Teaching Hospitals Trust and is a member of the NHS Bowel Cancer Screening Programme (BCSP) Research Committee.

He added: “With the BCSP in England being extended to cover everyone from the age of 50 in England, there will be even more people found to have bowel polyps, who we know are at increased risk of bowel cancer. We should now evaluate how aspirin and EPA can best provide added benefits to patients given our limited colonoscopy resources.”

Just over 700 people took part in the study from 53 hospitals in England, all of whom were identified as being at higher risk of developing bowel cancer after having a colonoscopy in the BCSP. This study is the first drug trial to have taken place in the English BCSP.

People who took part were randomly allocated to one of four treatment groups and, each day over the following year, they took either a 300 milligram aspirin tablet; two grams EPA in four capsules; a combination of both aspirin and EPA; or placebos only.

Patients who took aspirin had 22 per cent fewer polyps at the end of the one year study compared to those who took the placebo.

The study suggests that a ‘precision medicine’ approach may be the most appropriate way to use aspirin and omega-3 to prevent bowel polyps, in which patients at risk of particular types of polyps are given treatment specific to that risk.

“Prevention is key in this common disease and it's fascinating that the combination of widely available and relatively cheap drugs seemed to have such an impact."

EPA is naturally present in fish oil, but was given to patients at a higher dose than is present in most omega-3 supplements that are available to the public. Aspirin was provided by Bayer AG and EPA was partly provided by SLA Pharma AG.

Treatment with aspirin and EPA was safe with no increased bleeding risk seen. Individuals who took EPA on its own had a slight increase in stomach-upset symptoms.

The paper is titled ‘Eicosapentaenoic acid and aspirin, alone and in combination, for the prevention of colorectal adenomas (seAFOod Polyp Prevention trial): a multicentre, randomised, double-blind, placebo-controlled, 2 × 2 factorial trial’.