Atlas of inequality challenges assumptions of rich and poor areas 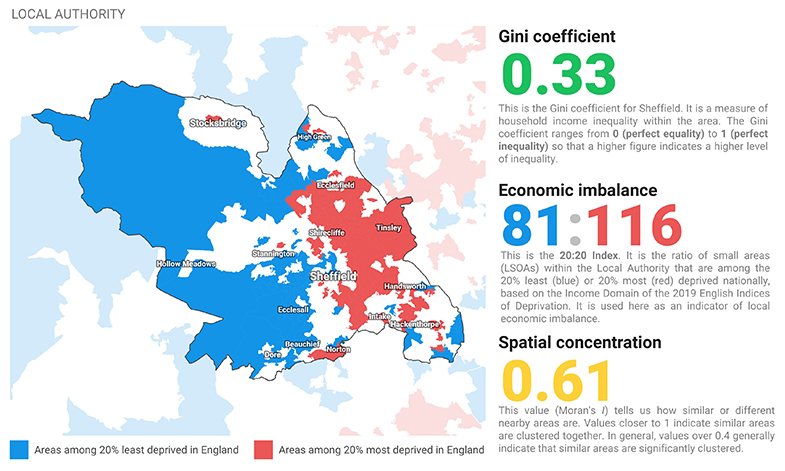 A new Atlas of Inequality, which aims to challenge misconceptions about rich and poor areas, has been launched today (Friday 29 November 2019).

The English Atlas of Inequality, developed by Professor Alasdair Rae and Dr Elvis Nyanzu from the University of Sheffield’s Department of Urban Studies and Planning, maps 149 commuting zones - known as Travel To Work Areas (TTWAs) - across England, showing levels of inequality within the areas.

The research, funded by the Nuffield Foundation, used three separate measures of inequality and compared the results of each measure in the TTWAs to outcomes for the population in mortality, poverty and entry to higher education; to understand how alternative approaches to understanding inequality can produce very different results.

Researchers used the most commonly used inequality measure, the ‘Gini coefficient’, which looks at income distribution, alongside the ‘20:20 Index’, a measure of economic imbalance within areas and also ‘Moran's I’ which measures geographic clustering of different income groups.

The results of their work highlight the risks of using one single measure to understand the issue of inequality in England. So to complete the atlas, the researchers also measured inequality within all local authority districts and parliamentary constituencies.

Professor Alasdair Rae, said: "When we look at the income distribution in Sheffield, the city is less unequal than some other major English cities, such as London or Cambridge. However, when we look at Sheffield’s neighbourhoods, 81 feature as being among the least deprived 20 per cent in England on income, whereas 116 neighbourhoods feature among England's most deprived 20 per cent.

When using the Gini coefficient to measure inequality, researchers found that some of England’s most deprived coastal communities such as Skegness, Sunderland and Bridlington wouldn’t be seen as a priority; as despite being among the poorest local economies, they are some of the most equal within their own boundaries.

Whereas measuring inequality through geographic income clusterings found patterns of income deprivation are often more closely associated with poorer outcomes than the other two measures.

The researchers also found that their analysis of economic imbalance data showed that many of the poorest people in England don’t live in the poorest locations. They noted the need to examine this more, or policies which seek to remedy poverty and inequality may miss their targets.

Professor Alasdair Rae, said: “Our atlas highlights the fact that no one measure of inequality paints the full picture and that methodological diversity is needed before we start to think of solutions to inequality at a local, sub-national and national level.

“There are some confounding features of inequality in that some of England’s most unequal places have some of the best outcomes on key measures such as mortality and entry to higher education. Yet the opposite is also often true.

“This is a reminder that a policy focus on inequality ought also to be linked to a focus on poverty alleviation and equality of opportunity, but also that how we understand inequality is inextricably linked to how we measure it in the first place.

“Our hope is that this atlas can make a small contribution to the debate and help shed light on a topic of critical importance.”

Alex Beer, Programme Head at the Nuffield Foundation, said: “This English Atlas of Inequality advances our knowledge of how inequalities are distributed at the local level. The Atlas highlights the importance of taking a multi-faceted approach to the study of inequality and to policy making for a more inclusive society.”

Sheffield is the only university to feature in The Sunday Times 100 Best Not-For-Profit Organisations to Work For 2017 and was voted the number one university in the UK for Student Satisfaction by Times Higher Education in 2014. In the last decade it has won four Queen’s Anniversary Prizes in recognition of the outstanding contribution to the United Kingdom’s intellectual, economic, cultural and social life.