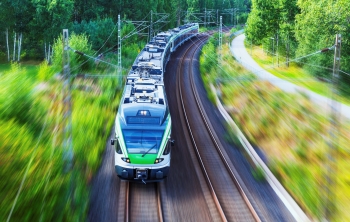 Engineers have received £1.5million in funding for a new battery energy storage project that could mean more efficient and cheaper trains.

The TransEnergy project led by the University of Sheffield, will work with Network Rail to investigate how battery storage could be used to power our railways.

As train companies try to increase the frequency of trains on existing railway infrastructure, electricity supply is under greater pressure to be available at peak times.

Engineers will study whether batteries from electric vehicles parked at train stations could supplement the system at busy periods. Commuters could receive free parking in return for their electric cars being used as back-up batteries, providing Road to Rail energy exchange.

The use of batteries will reduce the demand for electrical energy supply in these periods and could mean rail operators benefit from more efficient and frequent services. Passengers could in turn benefit from reduced costs and more train services.

A recent report by the National Infrastructure Commission has suggested that energy storage technologies could contribute to innovations that could save consumers up to £8 billion a year by 2030, help the UK meet its 2050 carbon targets, and secure the UK’s energy supply for generations.

We could deliver real benefits to both rail companies and consumers, bringing down the costs of travel and improving services.

The team will develop a purpose-built energy storage test facility at a site alongside a train line, the first of its kind in the UK. The facility will investigate two types of energy storage - batteries and supercapacitors as a hybrid solution for the high levels of electricity needed to power trains accelerating and charge from trains braking.

Dr Martin Foster from the University of Sheffield’s Department of Electronic and Electrical Engineering said: "Electric powered rail travel has helped to reduce pollution and improve the comfort of travellers. Our project will look at how we can meet the demand for more electricity on our railways by investigating innovative ways to store surplus energy.

“Similar energy storage systems are already being used on the electricity grid during peak times and by translating these to our railways, we could deliver real benefits to both rail companies and consumers, bringing down the costs of travel and improving services.”

James Ambrose, Principal Engineer for Network Rail said: “Network Rail is committed to electrifying more lines in the UK. Our project will be working with rail providers to recommend new approaches that will mean increased efficiency for the industry.”

The University of Leeds will lead the research on the attractiveness of the system to end users and incentives for implementation.

In March 2016, University of Sheffield officially launched the 2MW Willenhall Energy Storage System - the fastest and one of the largest batteries in the UK.

Energy2050
The University of Sheffield’s Energy2050 initiative is one of the UK’s largest energy research institutes with the aim of addressing how the UK can move towards a more affordable, secure and sustainable future.
http://energy2050.ac.uk/

With almost 27,000 of the brightest students from over 140 countries, learning alongside over 1,200 of the best academics from across the globe, the University of Sheffield is one of the world’s leading universities. A member of the UK’s prestigious Russell Group of leading research-led institutions, Sheffield offers world-class teaching and research excellence across a wide range of disciplines. Unified by the power of discovery and understanding, staff and students at the university are committed to finding new ways to transform the world we live in.
Sheffield is the only university to feature in The Sunday Times 100 Best Not-For-Profit Organisations to Work For 2016 and was voted number one university in the UK for Student Satisfaction by Times Higher Education in 2014. In the last decade it has won four Queen’s Anniversary Prizes in recognition of the outstanding contribution to the United Kingdom’s intellectual, economic, cultural and social life.
Sheffield has five Nobel Prize winners among former staff and students and its alumni go on to hold positions of great responsibility and influence all over the world, making significant contributions in their chosen fields.
Global research partners and clients include Boeing, Rolls-Royce, Unilever, AstraZeneca, Glaxo SmithKline, Siemens and Airbus, as well as many UK and overseas government agencies and charitable foundations.