Dan graduated from the University of Sheffield in 1998 with a BA in History, before following his passion for broadcasting with an MA in Journalism the following year. He now sponsors and mentors two bursary-winning journalism students at the University of Sheffield every year, giving the students the unique opportunity to experience working in the competitive industry of broadcasting. 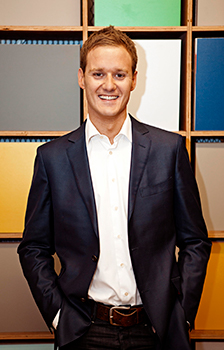 First starting his broadcasting career with work experience at Hallam FM, Dan took over as the presenter of Football Focus on the BBC in 2009 and quickly became a regular presenter on Radio 5 Live, Final Score and Match of the Day.

Now a co-anchor on BBC Breakfast, Dan currently lives in Sheffield with his family and is an active patron of Sheffield Children’s Hospital charity.

Dan will receive an Honorary Doctorate of Letters in recognition of his broadcasting achievements and the dedicated support he offers to students at 12.30pm on Thursday 10 January 2019.

Stuart Green, a leader in the field of digital technologies, will also be receiving an Honorary Doctorate in Engineering during the Winter graduation ceremonies.

Stuart has set up and led several major Sheffield-based companies involved in graphic processing and the synchronization of sound and subtitles for movies. Stuart will receive an Honorary Doctorate of Engineering at 4pm on Wednesday 9 January.

Also receiving an honorary doctorate is Chris Watson, Sheffield born member of the influential band Cabaret Voltaire. He is recognised as a pioneer in creating soundscapes which involve recording the sounds of wildlife and places from around the world. He has many awards including BAFTAs for his work in television. Chris will receive an Honorary Doctorate in Music at 4pm on Thursday 10 January.

On Friday 11 January, Professor Ian Cooke will receive an Honorary Doctorate of Medicine. Ian has held the Chair of Obstetrics and Gynaecology at the University of Sheffield from 1972 to 2000. During his time here, he combined laboratory reproductive research with clinical infertility. He has also worked with the World Health Organization and the International Federation of Fertility Societies for several years. Ian will receive his Honorary Doctorate at 9.30am.

Also honoured in the ceremony is Ciara Eastell, one of the UK’s leading public librarians. She studied librarianship at the University’s Information School and championed the role of libraries in disadvantaged areas. Ciara was also appointed OBE in the 2017 New Year’s Honours. Ciara will receive an Honorary Doctorate of Letters on Friday 11 January at 12.30pm.

Ann Cairns will also be receiving an Honorary Doctorate of Letters. Ann is the Vice Chair of Mastercard and has more than 25 years’ experience working in senior management positions across Europe and the US. She studied mathematics at the University of Sheffield and became the first woman in Britain qualified to work on offshore oil and gas rigs. Ann will receive her Honorary Doctorate on Friday 11 January at 4pm.

This year the Professor Robert Boucher Distinguished Alumni Award will be presented to Dr Keith Clarkson. With a deep passion for all things ornithological, coupled with an ability to enthuse and educate, Dr Clarkson has opened up the world of birds to many.

With a BSc Zoology in 1979 and PhD in Zoology in 1985 he is an expert in visible migration and his work to make the Royal Society for the Protection of Birds’ Bempton Cliffs nature reserve accessible to all has resulted in visitors experiencing the lives of seabird colonies in amazing detail.

The University of Sheffield
With almost 29,000 of the brightest students from over 140 countries, learning alongside over 1,200 of the best academics from across the globe, the University of Sheffield is one of the world’s leading universities.
A member of the UK’s prestigious Russell Group of leading research-led institutions, Sheffield offers world-class teaching and research excellence across a wide range of disciplines.