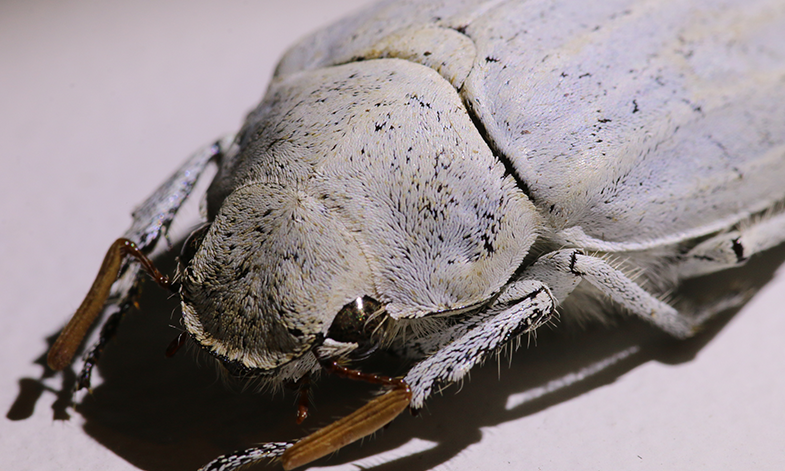 The structure of ultra-white beetle scales could hold the key to making bright-white sustainable paint using recycled plastic waste, scientists at the University of Sheffield have discovered.

Cyphochilus beetle scales are one of the brightest whites in nature and their ultra-white appearance is created by the nanostructure in their tiny scales, as opposed to the use of pigment or dyes.

Experts have now been able to recreate and improve on this structure in the lab using low cost materials – via a technique which could be used as a sustainable alternative to titanium dioxide in white paint.

Dr Andrew Parnell, from the University of Sheffield’s Department of Physics and Astronomy, who led the research, said: “In the natural world, whiteness is usually created by a foamy, Swiss cheese-like structure made of a solid interconnected network and air. Until now, how these structures form and develop and how they have evolved light-scattering properties has remained a mystery.

“Having understood these structures we were able to take plastic and structure it in the same way. Ideally, we could recycle plastic waste that would normally be burnt or sent to landfill, structure it just like the beetle scale and then use it to make super white paint. This would make paint with a much lower carbon footprint and help tackle the challenge of recycling single-use plastics.”

The findings show that the foamy structure of the beetles’ scales had the right proportion of empty spaces, which optimise the scattering of light – creating the ultra-white colouring.

Conventional white paint contains nanoparticles of titanium dioxide, which scatter light very strongly. However, the use of titanium dioxide is harmful to the environment as it contributes to nearly 75 per cent of the carbon footprint of each tin of paint that is produced.

To measure the tiny individual beetle scales, researchers used a technique called X-ray tomography, which is similar to a CT scan but on a miniscule scale. The scientists used the X-ray imaging facilities at the instrument ID16B at the European Synchrotron Research Facility (ESRF) in Grenoble, France.

The intense X-ray source at the ESRF meant whole intact scales could be measured, which was pivotal to understanding them and modelling how they scatter light. To follow how the synthetic material formed, they again used the ESRF to confirm the formation mechanism as the layer dried and became structured.

Dr Stephanie Burg, a PhD researcher at the University of Sheffield said: “This research answers long-standing questions about how the structure inside these scales actually form and we hope these lessons from nature will help inform the future of sustainable manufacturing for paint.”
The team also used the instrument Larmor at the ISIS Spallation Neutron Source, which measured the nanostructure of the synthetic whites they made. This was at the Rutherford Appleton Laboratory in Oxfordshire – part of the Science and Technologies Facilities Council.

The work was carried out in collaboration with the coatings company AkzoNobel, makers of Dulux paint. The paper Liquid-liquid phase separation morphologies in ultra-white beetle scales and a synthetic equivalent was published today (29 August 2019) in Nature Communications Chemistry.