Beirut explosion was one of the largest non-nuclear blasts in history, new analysis shows 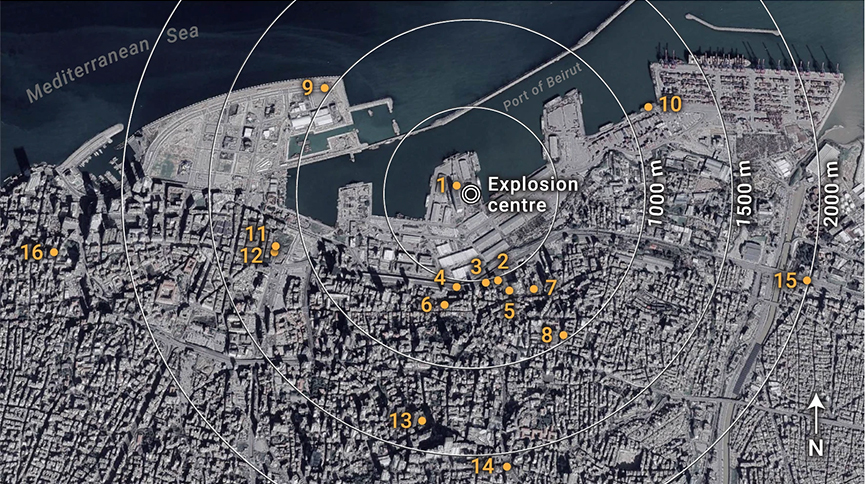 The explosion in the Port of Beirut was one of the biggest non-nuclear blasts in history - releasing enough energy in a matter of milliseconds to power more than 100 homes for a year - according to a new assessment of the disaster by engineers from the University of Sheffield.

Researchers behind the study, from the University’s Blast and Impact Engineering Research Group, hope that the new assessment can be used to provide policymakers and the public with more accurate information on the blast, as well as to help first responders prepare for future disasters and save lives.

After analysing videos of the explosion posted on social media, the team of researchers has been able to estimate the power of the blast by tracking how the explosion’s shockwave spread through the city.

The new assessment by the Sheffield engineers, which is published in the journal Shock Waves, found that the size of the explosion was the equivalent of between 500-1100 tonnes of TNT - around 1/20th of the size of the atomic bomb that was used on Hiroshima on 6 August 1945 and is one of the largest non-nuclear explosions ever recorded.

The explosion also released - in a matter of milliseconds - the equivalent of around 1GWh of energy. This is equal to the hourly energy generated by three million solar panels or 400 wind turbines.

The engineers hope that by releasing a more accurate assessment of the blast, including an insight into how the shockwave travelled, it could be used to help with future disaster response planning. The data could be used by first responders to help predict the likely injuries and structural damage at various distances from a blast in future emergency situations.

Dr Sam Rigby, Senior Lecturer in Blast and Impact Engineering at the University of Sheffield, said: “The disaster that hit Beirut this summer was devastating and we hope that nothing like that ever happens again. This was an unprecedented event because never before has such a large explosion been so well documented. The reason why we decided to analyse the explosion is because as engineers it's our jobs to use the skills and resources we have at our disposal to solve problems and ultimately to help people.

“After seeing the events unfold, we wanted to use our expertise in blast engineering to help understand what had happened in Beirut and provide data that could be used to help prepare for, and save lives in such events should they ever happen again.

“By understanding more about the power of large scale accidental explosions like the one that occurred in Beirut, we can develop more accurate predictions of how different buildings will be affected, and the types of injuries there are likely to be at different distances from the blast.”

Civil and Structural Engineering at the University of Sheffield