The Government has today (Wednesday 17 July 2013) announced plans to ban retailers from selling alcohol cheaper than the cost of the tax payable on the product. This ban on below-cost selling will have a very small impact on alcohol consumption and related harms according to the Sheffield Alcohol Research Group.

Experts, based at the University of Sheffield's School of Health and Related Research (ScHARR), whose research has been influential in providing evidence to inform policy decisions in the UK and beyond, analysed evidence on alcohol purchases in England under these new plans.

They estimated a small proportion (1.3 per cent) of all units of alcohol sold would fall below this proposed threshold. This varies by the type of drink, and in supermarkets and off-licenses it would affect 2.4 per cent of beer, just 0.1 per cent of cider, 0.4 per cent of wine and 1.2 per cent of spirits. 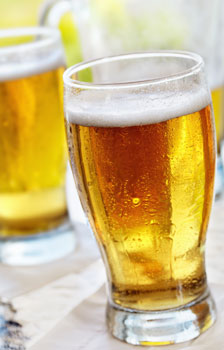 Using a further developed and updated version of the Sheffield Alcohol Policy Model, the researchers predict that the impact on overall alcohol consumption is small – a reduction of just 0.04 per cent (which equates to 0.3 units or less than half a pint of beer per drinker, per year). The impact on the five per cent of the population who drink at harmful levels was an estimated 0.08 per cent reduction (which equates to three units per year from a harmful drinker's average consumption level of over 3,700 units per year). To put this into context, an average pint of beer contains 2.3 units of alcohol and a bottle of wine contains nine units.

The central estimates for the impact on alcohol-related harm is a reduction of approximately 15 alcohol related deaths per year, 500 hospital admissions and 900 alcohol-related crimes.

In its alcohol strategy consultation, the Government had proposed a minimum price of 45 pence per unit of alcohol. The Sheffield modelling estimates that the impact of a 45p minimum price would be around 40 to 50 times larger than that of banning below-cost selling.

A 45p minimum price was estimated to lead to an overall 1.6 per cent drop in consumption, with a 3.7 per cent reduction for harmful drinkers (137 units per year compared to 3 units for below cost selling).

Professor Petra Meier, Director of the Sheffield Alcohol Research Group, said: "These new results suggest that the below-cost selling ban proposed by the Government would only have a small impact on alcohol-related harm in England.

"The Prime Minister’s foreword to the Government’s Alcohol Strategy acknowledged the problems associated with cheap alcohol. The proposed policy establishes a principle in regulating alcohol pricing. Our research shows that the previously proposed 45 pence minimum unit price would be likely to achieve much greater reductions in the health and social problems associated with harmful drinking.”

Estimated policy impacts are results from version 2.5 of the Sheffield Alcohol Policy Model. A detailed research report on minimum pricing policies and a separate addendum on below-cost selling are available at: https://www.sheffield.ac.uk/scharr/sections/ph/research/alpol/research/newresearch

Reductions in annual deaths and admissions are estimates after the policy has been in effect for 10 years. As many alcohol-related diseases take several years to develop, it is necessary to account for lagged affects over this ten year period to estimate the full effect of the policy.

For more information about the SAPM visit http://www.shef.ac.uk/scharr/sections/ph/research/alpol