Citizen scientists from across the globe are needed to help a team of University of Sheffield researchers map 3D scans of the bills of every living species of bird in the world. 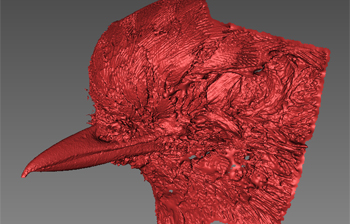 Dr Gavin Thomas, of the University’s Department of Animal and Plant Sciences, and his research group have embarked on the task of scanning the bills of 10,000 species to build the most comprehensive data set of bird bills ever attempted.

So far they have scanned 4,000 species – hoping to reach their 10,000 target in the next 12 months - but to turn the scans into data that can be analysed, they need to be ‘landmarked’.

The team has today (Monday 21 September 2015) launched a website (www.markmybird.org) where citizen scientists can help with that task by looking at the images and identifying features that are common to each species.

The data will help scientists learn more about birds and what bill evolution can tell us about the origin of species.

“There are 10,000 species of bird distributed around the world and they all possess a remarkably diverse and adaptable tool – the bill,” said Dr Thomas.

“The size and shape of the bill can betray the role an animal plays in its environment, what it feeds on and how it forages. We want to learn more about how this diversity came to be and the evolution of a tool as adaptable as the bill is an important piece of the puzzle.

“Each landmarked scan adds to our understanding of the diversity of birds.”

The specimens all come from natural history collections, including the Natural History Museum’s ornithological bird research collection at Tring and Manchester Museum, in the European Research Council funded project.

The Mark My Bird website, which was built by the University’s Humanities Research Institute, contains a gallery of 3D scans as well as a landmarking app. As they map the images, citizen scientists can climb the landmarking leaderboard and earn badges to mark their progress.

Dr Thomas added: “We are really excited about Mark My Bird. The team has been hard at work 3D scanning thousands of bills and citizen scientists can make a big contribution to our understanding by joining in with Mark My Bird.

To register for Mark My Bird visit www.markmybird.org/register

The Mark My Bird project is funded by the European Research Council and the Royal Society. The team’s work at the Natural History Museum has been made possible by museum staff, in particular senior curators Mark Adams and Hein von Grouw, and at Manchester Museum by support from Henry McGhie.