Report calls for Bradford’s hidden asset to be uncovered

A river once deemed the ‘filthiest in England’ could become attractive and healthy again, according to the final report of the Bradford Beck project, published today (5 March 2013). The report lays out ambitious plans to clean up and improve the river, allowing wildlife to thrive and making it an asset to the West Yorkshire city. 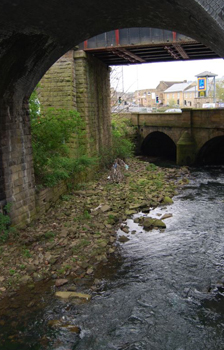 The Bradford Beck project – one of 25 pilot projects looking at new ways of managing and improving our rivers – tested water quality in the river and mapped its route through the city, to identify how and where the cleanliness and the attractiveness of the river for both people and wildlife could be improved. Led by the Aire Rivers Trust, with the support of the University of Sheffield’s Faculty of Engineering, the project has brought together local people and key organisations, including the Environment Agency, Yorkshire Water, Bradford Council and Yorkshire Wildlife Trust.

Although the water quality of Bradford Beck is not as bad as might be imagined from its appearance, pollution problems still remain, according to David Lerner, Professor of Environmental Engineering at the University of Sheffield, who tested over 70 samples taken from the river.

"Changes in the industry in the city over recent years have reduced pollution levels in the beck, though it could still be improved," said Professor Lerner. "Our tests showed that there are some significant discharges of sewage into the river, most likely from wrongly connected or badly operating sewers. Some industrial sites are also allowing pollutants to drain into the beck. However, these are all problems which could be easily rectified, making the restoration of Bradford Beck a very achievable goal."

A bigger challenge – also laid out in the report – is to improve the ecology of Bradford Beck, turning it from a drainage culvert back into a natural river which can support wildlife. Of the 11km of the beck which flows through the city, the majority is either hidden underground or forced to run through deep artificial culverts. Many of these date back to the 19th century, when Bradford Beck was so polluted it was deemed the filthiest river in England, despite the city being, at the time, the country’s richest. The culverts were constructed to hide the sight and smells of the river from the Bradford’s burgeoning population.

As part of the Bradford Beck project, a feasibility study was conducted on how to naturalise the stretch that runs from the city centre out to Shipley. This area is targeted by the city council for redevelopment and the project team believes that this offers an excellent opportunity to restore the river at the same time.

"Much of this stretch of the river runs in a straight line in a brick culvert between two high stone walls, and the speed of the water makes it impossible for wildlife to get established," explained Professor Lerner, who is also a member of the Aire Rivers Trust.

"By taking down one of the walls and creating a natural river bed and river bank, with twists and turns and pools which slow down the water, Bradford Beck could start to support wildlife, such as trout and kingfishers, and also be visible and accessible for people to enjoy."

Other measures highlighted in the report include setting up nature trails, foot and cycle paths and running educational activities to ensure local people can enjoy the river. The report also suggests that sections of the river which have to remain underground could be marked by paving, panels or with glass roofs, to help people be aware of Bradford Beck as an integral part of the city. To encourage local involvement, Aire Rivers Trust has already established a Friends of Bradford Beck group and is creating a website to inform people about the river and the plans for it.

The report also calls on all those involved in the city’s water system to take action to ensure the plan is put into practice. This includes regular monitoring of water quality, dealing with misconnected sewers and other drainage issues, and for those who own land bordering the river, taking full responsibility for keeping it clean and pollutant free.

"The report identifies some really concrete measures that can be taken to restore Bradford Beck to be an asset to the city," said Kevin Sunderland, Chairman of the Aire Rivers Trust. "Some of these are already underway, but we now need all parties – particularly the council, the Environment Agency and Yorkshire Water – to work with us to make this vision a reality."

For broadcast: local musician Eddie Lawler has written a song about the Bradford Beck. For an extract see: http://www.saltairevillage.info/shop-music-Eddie_Lawler_Bradford_Beck.html

Photos of various sections of Bradford Beck, both above and underground are available.

1. The Catchment Science Centre (CSC) is a collaborative research initiative, established jointly by the University of Sheffield and the Environment Agency. It draws on expertise from multiple academic departments at Sheffield, and has strong links with national and international academic partners. Research includes the disciplines of ecology, geomorphology, ecosystem services, hydrogeology, biogeochemistry, river restoration and groundwater – surface water interactions. There is a strong emphasis on finding solutions to urban problems, linking urban water with the fabric of the city and local society.

2. In 2012, Defra initiated a number of pilot projects using the “Catchment Based Approach” to the coordinated management of land and water. The Bradford Beck project is one of the 15 of these pilots being led by non-government groups; a further 10 were led by the Environment Agency. The approach recognizes that tackling land management and water issues effectively cannot be solely undertaken by, or the responsibility of, one organisation but requires many actors to work in conjunction. The pilots have explored different ways to reach a mutually agreed vision within an individual catchment. This leads to a ‘catchment plan’ which will be a jointly owned, living document that sets out future aspirations and the road map for achieving them. For more information, visit: http://www.defra.gov.uk/environment/quality/water/legislation/catchment-approach/

3. The Faculty of Engineering at the University of Sheffield - the 2011 Times Higher Education’s University of the Year - is one of the largest in the UK. Its seven departments include over 4,000 students and 900 staff and have research-related income worth more than £50M per annum from government, industry and charity sources. The 2008 Research Assessment Exercise (RAE) confirmed that two thirds of the research carried out was either Internationally Excellent or Internationally Leading.

The Faculty of Engineering