A number of lost Broadway songs from one of America’s most beloved musicals are set to receive their world premiere this week (25 February 2018) thanks to research from the University of Sheffield. 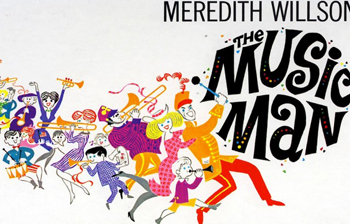 The concert, organised by Dr Dominic McHugh from the University’s Department of Music, features some of the biggest hits from the Broadway musical The Music Man, as well as songs that were cut from the final production.

Dr McHugh rediscovered some of the lost songs during his research at the Great American Songbook Foundation in Carmel, Indiana. The eight lost songs will now receive their world premiere at the University of Sheffield’s concert alongside other rarities from the score, including alternate versions of some of its familiar songs.

The Music Man, by world renowned composer Meredith Willson, was the most successful Broadway musical of the 1957-58 season. It opened at the same time as Leonard Bernstein’s West Side Story, but ran for almost twice as long, won the Tony Award for Best Musical, and received more consistently enthusiastic reviews from Broadway critics.

Although the musical is not widely known today in the UK, it became one of the most loved musicals in the US and includes the song Till There Was You, which was covered by The Beatles.

Dr Dominic McHugh, who is an expert on the history of Broadway musicals from the University of Sheffield, said: “The Music Man has always been one of my favourite musicals. When I looked through the archives at Willson’s papers – which were only released in 2012 – and saw all these wonderful songs that were removed before the show opened on Broadway, I knew we had to perform them for the 60th anniversary. It’s such a privilege that Willson’s estate has allowed us to perform these songs – for one night only.”

The Music Man features the story of a travelling conman who convinces locals to start a band by purchasing uniforms and equipment from him. His intention is to flee as soon as he receives the money, however he develops feelings for a local librarian and faces a difficult decision about skipping town.

Dr McHugh will present the concert, explaining the background to the show and each song, using research from Carmel as well as the Juilliard School of Music in New York. The research will lead to a book for Oxford University Press.

Many of the students involved in the concerts have been involved in Dr McHugh’s Broadway module as part of the University’s undergraduate Music degree. The University’s Department of Music is ranked number six in the UK for research excellence in the latest Research Excellence Framework (REF) assessment in 2014.

The Music Man: a 60th Anniversary Celebration will be performed on Sunday 25 February 2018 at Firth Hall, Sheffield.

The Music Man: tickets and information