Butterflies are loved throughout the world for their striking and diverse colours and now scientists at the University of Sheffield have identified the gene responsible for their colour patterns.

The study, led by Dr Nicola Nadeau from the University’s Department of Animal and Plant Sciences, has discovered that a gene called cortex controls some of the major differences in butterfly warning colour patterns. 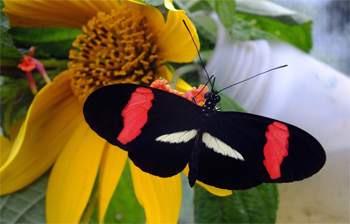 The researchers studied the wing colour patterns of the Heliconius, also known as passion-vine butterflies- a species of brightly coloured butterfly found in the rainforests of Latin America. Their colours warn predators that they contain toxins, which they get from the passion-vine plants they eat as caterpillars.

As well as being bright, their colours are also extremely variable, and the same species of butterfly often has very different patterns in different areas.

Predators in a particular area will only recognise and avoid the patterns of butterflies found in that same area, which stops any one pattern from spreading to other places.

The research led by scientists from the Universities of Sheffield and Cambridge, found that the cortex gene controls wing pattern variation in three different species of Heliconius butterfly.

Two of these species mimic each other by having almost identical colour patterns where they are found together, even though they are not closely related to each other. Having the same colours protects both species from predators by making it easier for the predators to learn to avoid the pattern they both share.

Dr Nadeau, who led the research from Sheffield’s Department of Animal and Plant Sciences, said: “The wing patterns of butterflies have puzzled scientists and nature-lovers for generations. Their patterns are beautiful to look at but also amazing when you see how much they can change, sometimes within tens of kilometres, as you travel through the rainforest.

“What our study did was look for differences in the DNA of butterflies with different patterns to try to understand what it is that controls their colour patterns. We identified a fast-evolving gene called cortex, which we believe is responsible for butterflies changing colours and patterns in order to protect themselves from predators.”

In a separate study published at the same time as the Sheffield research, Dr Nadeau’s peers at the University of Liverpool found that the cortex gene also controls colour variation in the peppered moth.

Following the introduction of the Clean Air Act, the moths have since gone back to being mostly pale coloured.

The Liverpool-led team found that this colour change was produced by a mutation in the cortex gene, which occurred around 30 years before the first reported sighting of black peppered moths in Manchester.

“Our results are even more surprising because the cortex gene was previously thought to only be involved in producing egg cells in female insects, and is very similar to a gene that controls cell division in everything from yeast to humans.”

To view the article on Nature please visit: http://www.nature.com/nature/journal/v534/n7605/full/nature17961.html

To view a copy of the paper please visit: http://rdcu.be/iFw5