Pollution-busting laundry additive gets set to clean up

An additive created in a unique collaboration between the University of Sheffield and the London College of Fashion which can be washed into clothes so the wearer purifies the air as they move could be available within just two years. 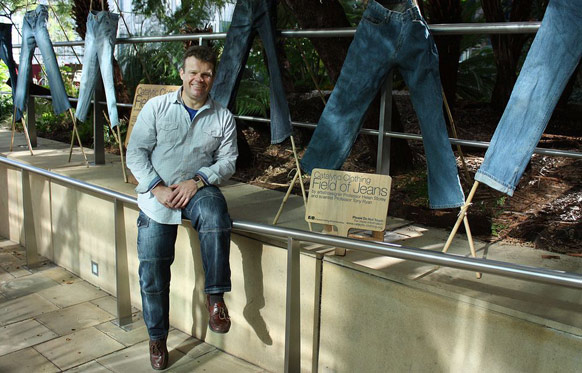 The new additive is the result of collaboration between the University of Sheffield and
London College of Fashion, with initial support from the Engineering and Physical Sciences Research Council (EPSRC).

The items of clothing only need to be washed in the additive once, as the nanoparticles of titanium dioxide grip onto fabrics very tightly. When the particles then come into contact with nitrogen oxides in the air, they react with these pollutants and oxidise them in the fabric.

The nitrogen oxides treated in this way are completely odourless and colourless and pose no pollution hazard as they are removed harmlessly when the item of clothing is next washed, if they haven’t already been dissipated harmlessly in sweat. The additive itself is also completely harmless and the nanoparticles are unnoticeable from the wearer’s point of view.

One person wearing clothes treated with CatClo would be able to remove around 5g of nitrogen oxides from the air in the course of an average day – roughly equivalent to the amount produced each day by the average family car.

Nitrogen oxides produced by road vehicle exhausts are a major source of ground-level air pollution in towns and cities, aggravating asthma and other respiratory diseases. Asthma currently affects one in 12 adults and one in 11 children in the UK.* As well as the general benefits that would result from people using CatClo, those suffering from respiratory conditions could also, by wearing clothes treated with the additive, give themselves cleaner air to breathe as they move around.

Professor Tony Ryan OBE of the University of Sheffield, who has co-led the project working closely with Professor Helen Storey MBE from London College of Fashion, said: “It’s the action of daylight on the nanoparticles that makes them function in this way. The development of the additive is just one of the advances we’re making in the field of photocatalytic materials – materials that, in the presence of light, catalyse chemical reactions. Through CatClo, we aim to turn clothes into a catalytic surface to purify air.”

“If thousands of people in a typical town used the additive, the result would be a significant improvement in local air quality”, says Professor Ryan. “This additive creates the potential for community action to deliver a real environmental benefit that could actually help to cut disease and save lives. In Sheffield, for instance, if everyone washed their clothes in the additive, there would be no pollution problem caused by nitrogen oxides at all.”

Professor Helen Storey, added: “When Science and Culture work together in this way, it becomes possible to involve the intended end user in the early stages of the development of the technology. This in itself is still a relatively new concept. **Through the making of a short viral film about CatClo, we were able to reach an audience of over three hundred million people, from across 147 countries, engaging the public in the normally hidden research process. The direct feedback and enthusiasm we received revealed a massive market for this product from potential consumers who understand the concept behind it.”

“We’re now working closely with a manufacturer of environmentally friendly cleaning products to commercialise our laundry additive,” says Professor Ryan. “We believe that using the additive in a final rinse with a full washing load could potentially cost as little as 10 pence – a small price to pay for the knowledge that you’re doing something tangible to tackle air pollution and increase the life expectancy of people with respiratory conditions. We’re confident there’s a really big market out there for this product.”

The new additive was initially developed as part of the 18-month ‘Extreme collaboration delivering solutions for a failing world’ initiative which received total EPSRC funding of £202,000.

A nanoparticle is a particle with at least one dimension less than 100 nanometres (One nanometre is a billionth of a metre).

The research, including a catalytic clothing field of jeans, will be featured as part of the Manchester Science Festival (27th October – 4th November 2012) for more information see http://www.manchestersciencefestival.com/whatson/fieldofjeans. CatClo works particularly well on denim and there are more jeans on the planet than people. So, even if we just used CatClo on this one item of clothing from our wardrobe it could make a significant difference.

This summer, the capabilities of this ingenious additive were demonstrated at New York’s Museum of Modern Art on ‘WENDY’, a 14-metre high, spiky-armed experimental construction. The nylon fabric covering WENDY was sprayed with the additive and, over a 10-week period, removed nitrogen oxides from the air equivalent to the amount produced by around 260 cars.

The Engineering and Physical Sciences Research Council (EPSRC) is the UK’s main agency for funding research in engineering and physical sciences. EPSRC invests around £800m a year in research and postgraduate training, to help the nation handle the next generation of technological change. The areas covered range from information technology to structural engineering, and mathematics to materials science. This research forms the basis for future economic development in the UK and improvements for everyone’s health, lifestyle and culture. EPSRC works alongside other Research Councils with responsibility for other areas of research. The Research Councils work collectively on issues of common concern via Research Councils UK (RCUK). www.epsrc.ac.uk

The University of Sheffield, with nearly 25,000 students from 125 countries, is one of the UK’s leading and largest universities. A member of the Russell Group, it has a reputation for world-class teaching and research excellence across a wide range of disciplines.

The University of Sheffield has been named University of the Year in the Times Higher
Education Awards for its exceptional performance in research, teaching, access and business performance. In addition, the University has won four Queen’s Anniversary Prizes (1998, 2000, 2002, and 2007). www.shef.ac.uk

London College of Fashion has an international reputation as a leading provider of fashion education, research and consultancy. The unique portfolio of specialist courses range in level, from short courses to Postgraduate. The subject range corresponds to the process of the creation, production and promotion of fashion and the management and marketing of those activities. Many of the College’s courses are unique to the UK and offer students an experience unmatched by even a handful of specialist colleges worldwide. The College's work is centred on the development of ideas: its staff and students use fashion alongside historical and cultural practice to challenge social, political and ethical agendas. This, combined with its forward-thinking business and management portfolio and its relationship with the global fashion and lifestyle industries, is the underpinning of its mission to "Fashion the Future." www.fashion.arts.ac.uk