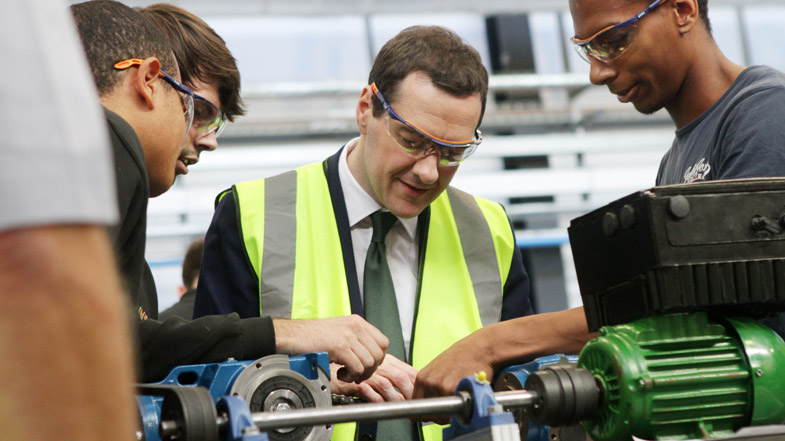 The Chancellor toured the state-of-the-art Factory of the Future and met apprentices at the AMRC Training Centre, where he learnt the importance of advanced apprenticeships achieving the same excellent reputation as Britain's traditional university degrees.

Earlier this year, the AMRC announced a new education route for successful apprentices to study advanced vocational university degrees as part of their apprenticeship training. This means the University is one of the first in higher education to offer quality advanced manufacturing Foundation, Undergraduate and Masters degrees using the apprenticeship model, jointly funded with business.

Announcing a devolution deal for the Sheffield City Region, the Chancellor said funding would allow further investment in skills and training.

“The commitment we’re making of £30 million over 30 years equates, a total of £1 billion, enables you to make long-term decisions to invest in local skills, local manufacturing, in the research and development of the future – and you’re not going to be dependent on the annual budget handed down from Whitehall for this important work.”

He has also called for the establishment of a Royal College of Apprenticeships to create a global gold standard in apprentice education.

Sir Keith said: “As the regional economy grows, we will see the growth of our AMRC Training Centre - an inspirational model for the very best apprentice education totally attuned to innovation and the needs of industry.

“I am thrilled that the Chancellor has seen for himself these superb apprentices who work in such a progressive environment can continue to be trained to degree level and shape the future of UK industry. There is a pioneering spirit at work. With these new powers for the city, I am certain we will lead the UK in providing technical education of the very highest quality.”

He added: "The advanced apprenticeship model developed here provides real access to opportunity so attractive to advanced manufacturing firms who know there are sustainable jobs here and careers that will pay. It’s precisely what the nation needs, not only to conquer challenges in the UK economy such as labour productivity and skills, but also to compete and connect globally. I am glad of the chance to show what the North has to offer."

The first cohort of AMRC Advanced Apprentices was accepted in 2014 in a state-of-the-art training centre at the Advanced Manufacturing Park.
The ground breaking AMRC Training Centre, supported by the Regional Growth Fund and European Regional Development Fund, aims to create knowledge and manufacturing breakthroughs by equipping highly skilled workers who will go on to regenerate the UK’s manufacturing industry.
Aged from 16, all of the apprentices come from a wide range of manufacturers with operations in the Sheffield city region, including Tata Steel, Rolls-Royce, Sheffield Forgemasters, AES Seal, MTL Group and Newburgh Engineering, and from the AMRC group itself.
As well as apprenticeships, the centre links with both Sheffield universities for higher-level education up to doctorate and MBA level, and offers a range of courses for continuing professional development.
The University’s AMRC is the recipient of the Queen's Anniversary Prize for Higher Education for the way it works in partnership with industry, and has won a number of international awards including Boeing Supplier of the Year - the first time this international award had been made either to the UK or to a university. The AMRC Advanced Apprentices were also named Widening Participation Initiative of the Year in the most recent Times Higher Education awards.
The AMRC Training Centre was praised in ‘Forging Futures: Building higher level skills through university and employer collaboration’, published by Universities UK and the UK Commission for Employment and Skills. The report included the AMRC as a case study of how employers and universities are working together to build pathways to the highly skilled jobs crucial to the UK’s economic future.

With almost 26,000 of the brightest students from around 120 countries, learning alongside over 1,200 of the best academics from across the globe, the University of Sheffield is one of the world’s leading universities. A member of the UK’s prestigious Russell Group of leading research-led institutions, Sheffield offers world-class teaching and research excellence across a wide range of disciplines. Unified by the power of discovery and understanding, staff and students at the university are committed to finding new ways to transform the world we live in. In 2014 it was voted number one university in the UK for Student Satisfaction by Times Higher Education and in the last decade has won four Queen’s Anniversary Prizes in recognition of the outstanding contribution to the United Kingdom’s intellectual, economic, cultural and social life. Sheffield has five Nobel Prize winners among former staff and students and its alumni go on to hold positions of great responsibility and influence all over the world, making significant contributions in their chosen fields. Global research partners and clients include Boeing, Rolls-Royce, Unilever, AstraZeneca, Glaxo SmithKline, Siemens and Airbus, as well as many UK and overseas government agencies and charitable foundations.