Despite China’s absence from this summer’s World Cup Finals, the world’s most populous nation is challenging for the number one spot in one aspect of football. A new study by the University of Sheffield has found that China has more statues depicting footballers (39) than any other nation apart from the UK, and also boasts the world’s largest football statue. 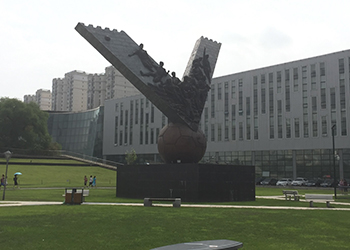 According to Dr Chris Stride, a statistician from Sheffield University’s Management School, the design, location and subject choice of these sculptures says much about China’s failure to join football’s top nations, and its future ambitions to do so.

The sheer number of statues depicting footballers, almost all erected in the past 10-15 years, and typically funded by the state, stems from the Chinese government’s desire for football success, with their stated aim being to host and win the World Cup. Yet the very need to overtly promote the sport reflects the minimal active involvement in football amongst Chinese citizens, Dr Stride says.

The study found many statues are situated at sports schools, China’s historic method for boosting performance through intensive coaching of elite youth talent. It has been suggested that China’s football ‘failure’ is not only due to a lack of active players, but also because their best young talent is over-coached rather than acquiring skills naturally in the street or playground.

The design of China’s football statues is influenced by wider cultural traditions and state policy, the article says. Elsewhere in the world, football statues typically depict star players performing crowd-pleasing skills such as shooting and dribbling. In China most show anonymous players tackling, thus promoting a sport based around characteristics of hard work and selfless commitment to the team and nation, as opposed to individual flair and celebrity.

China also boasts the world’s largest football statue (a giant victory ‘V’ erected to celebrate qualification for the 2002 World Cup Finals), the biggest team group (the players and officials of the 2002 squad) - and a statue gifted to Brazil showing Pelé playing football with an ancient Chinese emperor. The latter sculpture is a nod to China’s optimistic claims as football’s birthplace, and shows how the Chinese government is keen to find a way to place itself as a credible football nation despite only once qualifying for the World Cup.

Dr Stride said: “China’s football statues are both more numerous than you’d expect given the nation’s underachievement on the pitch, and very different from those found elsewhere.

“Collectively they reflect the tension between the government’s desire to be involved and succeed in the world’s most popular sport, with all the diplomatic kudos and soft power that that brings - yet minimise a loss of face due to current poor performances on the pitch, and fit football within national cultural traditions and state policies that are at odds with the sport’s global star culture.”

The Sporting Statues Project, based at the University of Sheffield, UK is a cross-disciplinary research study that records and researches figurative statues and other forms of commemoration of sportsmen and women around the world. Since 2010 we have published a series of academic papers and magazine articles, spoken at sport history, visual art, and sports marketing conferences, and collected information on over 600 statues.

At present the project website displays databases for all UK-sited sporting statues, US baseball statues, the world’s cricket statues, and the world’s football (i.e. soccer) statues. For news on forthcoming project publications and website updates, follow us on Twitter.