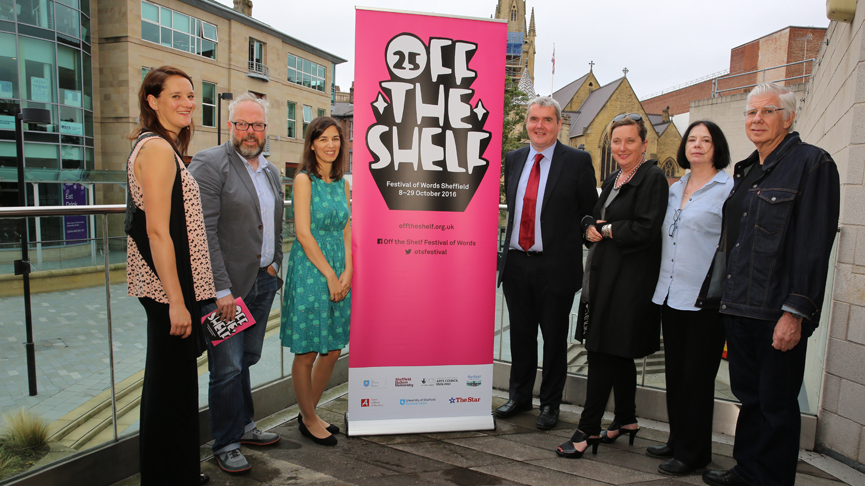 The University of Sheffield will play host to one of the founding members of The Cure as he discusses the band’s journey to worldwide acclaim, as part of Off the Shelf Festival of Words 2016.

Celebrating its 25th anniversary, Off the Shelf is now one of the UK’s most innovative festivals and one of the region’s most eagerly anticipated cultural events bringing worldwide literary talent to the city.

The Inside Story of The Cure is a memoir by Lol Tolhurst, drummer and keyboardist with iconic band The Cure. From meeting Robert Smith at the age of five, Lol traces The Cure’s story from schoolboy years, success in the 1980s, to the present day. The band’s journey to worldwide acclaim is woven into a tale of great highs and bitter lows, friendship, pain, forgiveness and, ultimately, redemption on a beach in Hawaii.

His story, which takes place in collaboration with University of Sheffield Students’ Union on September 28, is one of the many high-profile events on the literary festival’s calendar which this year has an amazing line up including former Deputy Prime Minister Nick Clegg, best-selling author Nick Hornby, celebrity chef Hugh Fernley Whittingstall and TV presenter and actor Tony Robinson.

This year, for the first time, both the University Of Sheffield and Sheffield Hallam University are working together to support and evolve the festival in association with Sheffield City Council and Lottery funded Arts Council England.

Professor Vanessa Toulmin, Director of City & Cultural Engagement at the University of Sheffield, said: “We are delighted that this year's Off the Shelf heralds a creative new partnership between the University of Sheffield and Sheffield Hallam to become part of the Curatorial Board. The Festival is a unique Sheffield institution and demonstrates the vibrancy, creativity and experience that our city is celebrated for and one that is enjoyed by students and staff alike.

“This new relationship includes student and research engagement, specially curated programmes by our academics alongside world class writing and literature by the authors. We are proud to help support and enrich such a wonderful event.”

Councillor Mary Lea, cabinet member for culture, parks and leisure at Sheffield City Council,
Said: “Once again Off the Shelf demonstrates its weight as a high profile literary festival on the national calendar, attracting an array of worldwide literary talent. The festival plays homage to its home city and the people in it by celebrating local writers within a jam packed programme as well as including numerous community and fringe events.”

Maria de Souza, Arts Officer at Off the Shelf said: “The Festival aims to provide a glittering, eclectic and accessible programme that is not only hugely enjoyable but does make you think. In 2016 we achieve a quarter of a century of celebrating the spoken and written word with a festival whose aim is to speak to everyone. We love welcoming our local and regional supporters and look forward to the increasing number of people who seek out the festival, and are keen to join us at any one of our 200 events.”

To find out more about the festival visit offtheshelf.org.uk

It Makes You Think
Off the Shelf officially runs from October 8 to 29, with around 200 events at venues across the city and some major talks outside those dates.
Off the Shelf Festival of Words celebrates 25 years this year. It has grown into one of the largest literary festivals in the UK, attracting some of the best known names in literature and media to Sheffield each year, and provides a programme that is wide ranging, offering events for all ages. In October the festival embraces words, ideas, conversations and the unexpected. Since ’91 the characters in the story of Off the Shelf have been many and varied – Hilary Mantel, Benjamin Zephaniah, David Mitchell, Carol Ann Duffy. Off the Shelf features great writers, historians, artists, scientists, journalists, musicians that guests can listen to, question and discover some secrets.

The University of Sheffield
With almost 27,000 of the brightest students from over 140 countries, learning alongside over 1,200 of the best academics from across the globe, the University of Sheffield is one of the world’s leading universities.
A member of the UK’s prestigious Russell Group of leading research-led institutions, Sheffield offers world-class teaching and research excellence across a wide range of disciplines.
Unified by the power of discovery and understanding, staff and students at the university are committed to finding new ways to transform the world we live in.
Sheffield is the only university to feature in The Sunday Times 100 Best Not-For-Profit Organisations to Work For 2016 and was voted number one university in the UK for Student Satisfaction by Times Higher Education in 2014. In the last decade it has won four Queen’s Anniversary Prizes in recognition of the outstanding contribution to the United Kingdom’s intellectual, economic, cultural and social life.
Sheffield has five Nobel Prize winners among former staff and students and its alumni go on to hold positions of great responsibility and influence all over the world, making significant contributions in their chosen fields.
Global research partners and clients include Boeing, Rolls-Royce, Unilever, AstraZeneca, Glaxo SmithKline, Siemens and Airbus, as well as many UK and overseas government agencies and charitable foundations.