The first ever compliance rating of the top 30 German listed companies has been published today (30 August 2017), with input from an academic at the University of Sheffield. 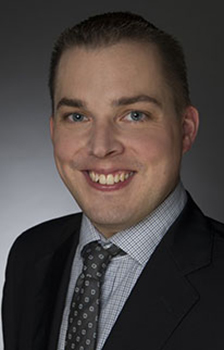 The rating, compiled for German investor magazine Fuchsbriefe by a jury of experts, including Dr Andreas Rühmkorf from the University’s School of Law, provides the first external assessment of the compliance quality of each of the DAX30 companies and measures how transparent they are about their compliance risks.

Assessing publicly available documents from the perspective of an investor, a five-person expert panel summarised their findings and offered a ‘risk key’ figure for each company – with a higher number signalling a higher risk.

Dr Rühmkorf, whose research interests include the legal aspects of Corporate Social Responsibility, was invited to be part of the magazine’s jury, which examined company information across six categories, including their employee and supplier code of conducts and the presentation of their compliance risks.

The results, announced at a press conference today, show the compliance systems of the DAX30 are predominantly ‘non-transparent’.

Dr Rühmkorf said: “Compliance is becoming an increasingly important issue, as recent scandals of multinational companies in several countries demonstrate. At the same time, there is – rightly so – an increasing expectation on companies to be transparent about the way they operate.

“These ratings show that the majority of the top 30 listed German companies are not transparent enough about their compliance systems. The overall picture that we have gained of these 30 companies is incoherent. Some companies show ‘best practice’ whereas many publish only very little information. It is, in my view, surprising to see that some companies do not make their code of conduct publicly available or do not have a subpage on compliance on their company website.”

The findings show ‘good’ investment ratings (a minimum of rating category B) were only achieved by six of the 30 companies: Siemens, Deutsche Telekom, ThyssenKrupp, SAP, Henkel and Bayer.

The jury assessed Siemens as ‘best practice’ among the DAX30 for its Supplier Code of Conduct, its transparency regarding its compliance management system and the presentation of its compliance risks.

The German real-estate company Vonovia was assessed to be the least transparent company and was awarded a rating of D with a risk key figure of 79.

Companies in the financial sector achieved poor positions and performed below average in most categories. Deutsche Bank, which also has a significant presence in the UK, came second to last and was awarded a rating of DD with a key risk figure of 67.

German car manufacturers Volkswagen, Daimler and BMW – affected by the ‘dieselgate’ scandal – were placed in the middle of the ratings.

Although the rating assesses the top 30 listed German companies, Dr Rühmkorf says the findings are significant from a UK perspective: “Germany is one of the two most important trading partners of the UK, together with the United States.

“It is also an important market for UK investors such as investment funds, especially as the German economy is becoming more international. There has, in recent years, been an increasing interest of UK investment funds in the corporate governance practices of German companies.”

He added: “The German market can easily appear like a ‘closed shop’, partly because not all well-known German companies are listed companies. And even those that are listed often have less diverse share ownership, which means that investment funds have less power than in the UK.

“However, these investment funds are increasingly keen to engage with the companies. Transparency is therefore an important tool to enable them to assess the business practices of the companies that they invest in. And our rating highlights potential gaps and flaws, due to a lack of transparency. This is something that we expect investors to be keen to see.’

The DAX30 companies were assessed in six categories, with points given for each of the following:

The risk key figure measures the companies’ non-transparency about their compliance risks.

The 30 companies were assessed by a five-person jury consisting of experts from academia, legal practice, compliance practice in businesses and business journalists.

More information about the rating