The University of Sheffield today (2 May 2014) revealed the name of its new £81 million state-of-the-art building at the heart of the campus – The Diamond.

Vice-Chancellor Professor Sir Keith Burnett and Sheffield Central MP Paul Blomfield revealed the new name at a site visit to catch up on progress on the construction of the 19,500 square metre building.

Selected following in depth market research, The Diamond not only reflects the physical attributes of the building with its distinctive diamond shape ‘wrap’, but also the quality of the space and facilities which will be on offer.

Scheduled to open by September 2015, work is already well underway on the six-storey building which, as well as providing specialist engineering teaching facilities, will also house a range of lecture theatres, seminar rooms, open-plan learning spaces, library services and social spaces, including a café. 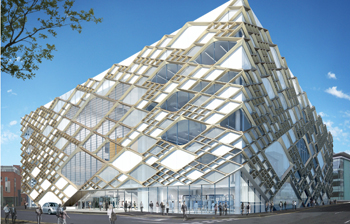 During the construction period alone, The Diamond will create around 500 jobs, with 400 permanent new jobs within the University once it is completed. It will also contribute £44.5 million to the local economy during construction and the first year of operation, with an annual contribution of almost £21 million after that.

"This is our largest ever investment in teaching and learning," said Vice-Chancellor Professor Sir Keith Burnett, "and it is really exciting to see the fantastic progress being made on site.

"The quality of the environment for teaching and learning is becoming increasingly important and we’re confident that The Diamond will be a very strong element in our already excellent offer to prospective students making their choices for a September 2015 start.

"Even though it won’t be completed until next year, The Diamond is already making a great contribution to our academic life, giving many of our engineering students the opportunity for regular site visits to see for themselves how what they’re learning at University is translated into practice on a major construction site."

Paul Blomfield added: "The Diamond really will be the jewel in the crown, not only for the University itself, but also for the city.

"It will play a huge part in positioning Sheffield as the destination of choice for our future engineers, with the University working closely alongside industry to support the development of the skills and innovation which are so essential to our economic success. I know how important The Diamond is to the future growth and development of the University and it’s great to see this fantastic new building taking shape."

Hoardings showing what will be on offer in The Diamond are currently being installed around the site, and a fly-through video of the development is available.