DNA tool allows you to trace your ancient ancestry 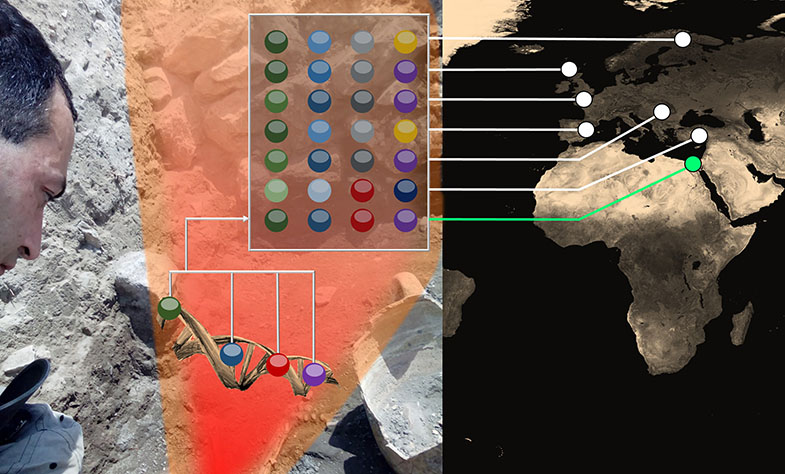 Scientists at the University of Sheffield studying ancient DNA have created a tool allowing them to more accurately identify ancient Eurasian populations, which can be used to test an individual’s similarity to ancient people who once roamed the earth.

Currently the study of ancient DNA requires a lot of information to classify a skeleton to a population or find its biogeographical origins.

The research, led by Dr Eran Elhaik, from the University of Sheffield’s Department of Animal and Plant Sciences, saw the identification of a small group of aAIMs that can be used to classify skeletons to ancient populations.

Dr Elhaik said: “We developed a new method that finds aAIMs efficiently and have proved that it is accurate.”

AIMs (Ancestry Informative Markers) have a long history in science and have been employed for the past decade by health and forensic experts.

But Dr Elhaik said that when his team applied traditional AIMs-finding tools to ancient DNA data, they were disappointed with their low accuracy.

“Ancient populations are much more diverse than modern ones,” he said. “Their diversity was reduced over the years following events such as the Neolithic revolution and the Black Death.

“Although we have many more people today they are all far more similar to each other than ancient people. In addition, the ancient data themselves are problematic due to the large amount of degraded DNA.”

To overcome these challenges, Dr Elhaik developed a specialised tool that identifies aAIMs by combining traditional methodology with a novel one that takes into account a mixture.

“Ancient genomes typically consist of hundreds of thousands and sometimes millions of markers. We demonstrated that only 13,000 markers are needed to make accurate population classifications for ancient genomes and while the field of ancient forensics does not exist yet, these aAIMs can help us get much closer to ancient people.”

He added: “Until now you couldn't test people for ancient DNA ancestry because commercial microarrays, such as the ones used for genetic genealogy, don't have a lot of markers relevant for paleogenomics - people could not study their primeval origins.

“This finding of aAIMs is like finding the fingerprints of ancient people. It allows testing of a small number of markers – that can be found in a commonly available array – and you can ask what part of your genome is from Roman Britons or Viking, or Chumash Indians, or ancient Israelites, etc.

“We can ask any question we want about these ancient people as long as someone sequenced these ancient markers. So this paper brings the field of paleogenomics to the public.”

Researchers said to make the study’s findings more accurate for identifying and classifying ancient people throughout the world, the framework and methods of the study should be applied again when more comprehensive ancient DNA databases are available.

With almost 29,000 of the brightest students from over 140 countries, learning alongside over 1,200 of the best academics from across the globe, the University of Sheffield is one of the world’s leading universities.
A member of the UK’s prestigious Russell Group of leading research-led institutions, Sheffield offers world-class teaching and research excellence across a wide range of disciplines.
Unified by the power of discovery and understanding, staff and students at the university are committed to finding new ways to transform the world we live in.
Sheffield is the only university to feature in The Sunday Times 100 Best Not-For-Profit Organisations to Work For 2018 and for the last eight years has been ranked in the top five UK universities for Student Satisfaction by Times Higher Education.
Sheffield has six Nobel Prize winners among former staff and students and its alumni go on to hold positions of great responsibility and influence all over the world, making significant contributions in their chosen fields.
Global research partners and clients include Boeing, Rolls-Royce, Unilever, AstraZeneca, Glaxo SmithKline, Siemens and Airbus, as well as many UK and overseas government agencies and charitable foundations.