Comment: Driving home for Christmas (with a tonne less CO2)

Dr Stuart Walker and Dr Rachael Rothman, from the University of Sheffield's Department of Chemical and Biological Engineering discuss the CO2 emissions of Chris Rea's drive home for Christmas.

Driving home for Christmas (with a tonne less CO2) 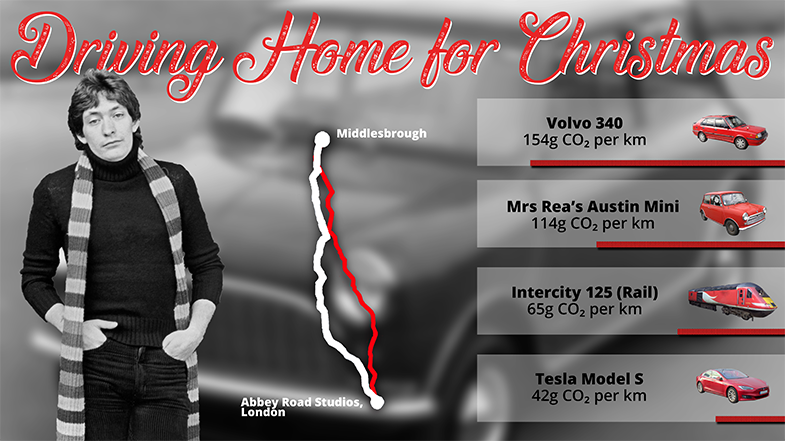 It’s that time of year when familiar songs return to the radio - thoughts of Last Christmas, A Fairytale of New York, and of course Driving Home for Christmas by Chris Rea. This festive classic was written in around 1978, and it got us wondering, if you find yourself miles from your loved ones on December 24th, and want to minimise your CO2 emissions, is driving home for Christmas really the best option?

We discovered that Chris wrote the song while on his way home to Middlesbrough from Abbey Road studios in London. At the time he travelled in his wife’s Austin Mini. The Mini’s one litre engine produced around 114 grams of CO2 per kilometer of the 388km journey back to Middlesbrough, giving a total of 44kg.

If he’d decided to travel by rail instead, Chris would have first needed to take the tube from St John’s Wood to Kings Cross (changing rom the Jubilee to Circle line at Baker Street), then travel up the East Coast Main Line to Darlington, then catch a final train to Middlesbrough. The long journey up the East Coast would account for 92% of the total CO2 emissions, which in 1978 would have been 25kg per passenger.

So in a parallel 1978 universe where Chris Rea wrote Travelling home for Christmas by train, he nearly halved his CO2 emissions.

Having satisfied out initial curiosity, we wondered whether the conclusion is different today, so we calculated CO2 emissions for some of Chris’ favourite cars between 1980 and 2019.

As might be expected, driving home for Christmas in a Ferrari is not the most environmentally friendly way to travel, but even the lightweight Caterham 7 or the tiny Fiat 500 which Chris currently own cannot compete with the rail option. The train was helped by the electrification of the East Coast Main Line, which allowed fully electric trains to be introduced in 1988, and emissions to fall as renewable energy made a greater contribution to the UK’s electricity supply during the 1990s and 2000s.

We then wondered whether Chris would ever be able to beat the emissions of the rail journey in a car. What if he had bought a Toyota Prius in 2009? Though its emissions are much lower than any of Chris’ previous cars, the hybrid Prius still burns diesel, and as electricity becomes ever less carbon intensive, the Prius is left behind.

What if he drove an electric car? We hypothesized that Chris Rea might’ve bought the first Tesla Model S in 2012. At this time its emissions were greater than those of the Prius, but as battery technology improved and and more renewable energy joined the grid the emissions fell. Using a Tesla in 2018 has comparable emissions to the 2012 train journey.

Finally, we looked to the future. New Hitachi Azuma trains began running on the East Coast Main Line earlier this year, and the UK grid now includes 33 per cent renewable generation. As battery technology improves further, Tesla’s forthcoming 2020 Roadster promises 1,000km per charge, and emissions which at one thirteenth of the original Mini’s, rival those of the train journey.

By 2030, Chris Rea may finally be able to drive home for Christmas with CO2 impunity.