President and Vice-Chancellor of the University of Sheffield Sir Keith Burnett unveiled what he believes will be a revolutionary concept in higher education, research and teaching with industry at a conference of global innovators in China’s high-tech city, Shenzhen. 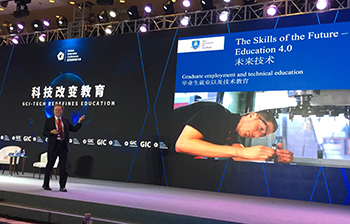 Speaking to an audience of tech innovators and industry leaders from around the world, including leading individuals from Google DeepMind, Sir Keith described an approach to education matching the transformation of next generation technologies in Industry 4.0 which integrates the latest technologies with industry needs and global partnerships: Education 4.0.

Describing Education 4.0, Sir Keith said: “This is a ground-breaking approach to education which began in Sheffield through our in-depth work on the very latest applications of technology and collaboration in advanced manufacturing with partners such as Boeing.

“From them, we learned that we need to completely rethink our boundaries, so it is no longer possible to see where the lab and lecture theatre end and the factory begins. Our Factory 2050, for example, looks more like an Apple Store than most people’s idea of an industrial research lab, and in it you see industrialists, research scientists and engineers, PhDs in AI and apprentices working side by side.

“We are taking virtual reality and bringing it all the way back to the reality of design and production.”

Education 4.0 is the intellectual property of the University of Sheffield but the University is already working with global partners to develop its potential.

Sir Keith said: “We know that Education 4.0 offers us the chance to do enormous local good, creating new opportunities for young people in our communities in the UK while simultaneously working with our partners in China, in South Korea or in Portland, Oregon.

“To develop this concept – and it is of course still developing fast – we are working with the world’s best. People like Martin Bean at the Royal Melbourne Institute of Technology who developed Future Learn and who works in an environment which never separated technical and academic education. We are using technologies to cross borders, to challenge old divides and to reboot the economy as we do it.

“It is a very exciting concept. I’m absolutely delighted that the Ministry for Industry in China is as excited about this work as are our partners Boeing and McLaren and all those who have supported the almost 1,000 apprentices we have already trained, providing industry sponsorship so the students themselves don’t have to pay fees. It really is the future.”

Combining state of the art technologies with the AMRC’s expertise in design and prototyping, machining, casting, welding, additive manufacturing, composites, assembly and structural testing, has created a manufacturing resource far beyond anything previously available in the UK.

Sir Keith Burnett FRS is President of the UK Science Council and a member of the UK Prime-Minister’s Advisory Council on Science and Technology. He also Chairs the Advanced Manufacturing Research Centre Board and leads work on Science and Innovation for the Sheffield City Region. Sir Keith is a Chinese speaker who has been honoured by China for his contribution to the understanding of Chinese language and culture.