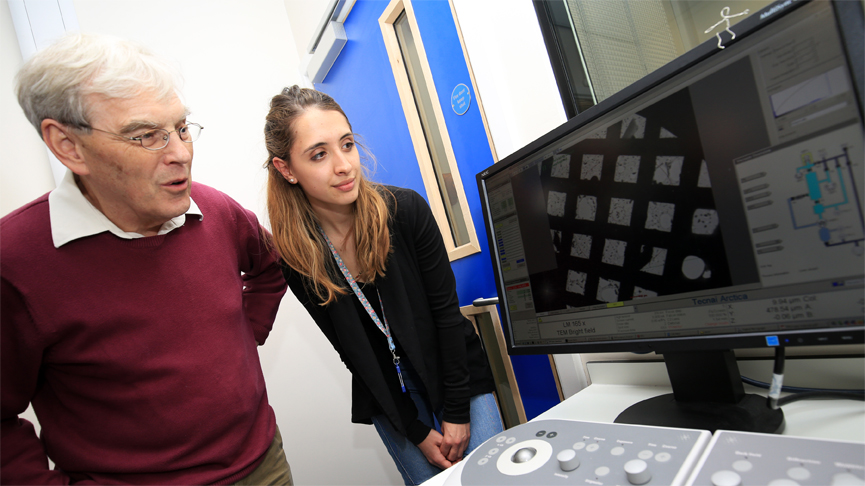 The University of Sheffield’s new multi-million pound electron microscopy facility was officially opened this week with a visit by Dr Richard Henderson, winner of the 2017 Nobel Prize in Chemistry.

The facility will be used to exploit recent scientific developments that have revolutionised our ability to visualise the inner workings of living things.

The importance of these developments was recognised last autumn when the Nobel Prize was awarded to Dr Henderson, Jacques Dubochet and Joachim Frank for their work in pioneering the field of cryo-electron microscopy.

The centrepiece of Sheffield’s new facility is an Arctica cryo-electron microscope (CryoEM) developed by FEI (Thermo Fischer). The Arctica incorporates state-of-the-art automation and detection technology to elucidate the three-dimensional structure of biological molecules and cells. It will allow the imaging of biological structures in the most exquisite detail, down to the level of individual atoms.

The facility is housed in the University of Sheffield’s Department of Molecular Biology and Biotechnology, where research groups and students will be able to use it to study the cellular structure of bacterial pathogens responsible for diseases such as C. difficile associated diarrhoea, MRSA and food poisoning.

Researchers will also be looking into the internal workings of photosynthesis, with the potential for development of new energy technologies. The facility has been funded through the University of Sheffield’s Imagine: Imaging Life project, which brings together biologists, physicists, and chemists in using revolutionary microscopy techniques to answer some of the biggest questions in biology and medicine.

Professor Per Bullough, one of the coordinators of Imagine, trained with Dr Henderson early in his career. He said: “The Arctica will lead us to exciting new discoveries that would never have been possible before. Biological imaging is a key research area in Sheffield and the new CryoEM facility will be equipped to allow us to integrate our work with other researchers working in ‘super-resolution’ light microscopy for cell biology applications. Sheffield is becoming a world-class centre of excellence in biological imaging.”

After visiting the new facility, Dr Henderson delivered this year’s Krebs Lecture, titled ‘The increasing power of cryoEM for macromolecular structure determination’. He took a sold out audience through some of his recent research results before discussing the remaining barriers to progress in the field.

The University of Sheffield’s Department of Molecular Biology and Biotechnology plays a leading role in flagship research centres at the University, which are addressing the challenges of infectious diseases and antimicrobial resistance. Researchers and students in the department have access to state-of-the art equipment and facilities in order to drive research and enhance student experience.

The Department of Molecular Biology and Biotechnology