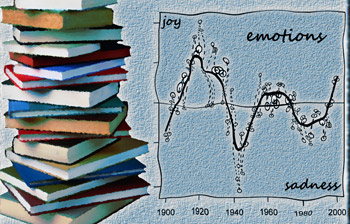 The use of words with emotional content in books has steadily decreased throughout the last century, according to new research from the Universities of Sheffield, Bristol and Durham.

The study, published today in PLOS ONE, also found a divergence between American and British English, with the former being more 'emotional' than the latter.

The researchers looked at how frequently 'mood' words were used through time in a database of more than five million digitised books provided by Google.

The list of words was divided into six categories (anger, disgust, fear, joy, sadness, surprise) previously used by a co-author Dr Vasileios Lampos, from the University of Sheffield’s Department of Computer Science and the Natural Language Processing Group, to detect contemporary mood changes in public opinion as expressed in tweets collected in the UK over more than two years.

Dr Lampos said: “The initial idea was simple: what if we apply a similar analysis on digitised books? And even the very first experimental results were depicting clear patterns of correlation between historical events and mood tendencies, such as the obvious peak in sadness during the Second World War.”

Dr Alberto Acerbi, a Newton Fellow in the Department of Archaeology and Anthropology at the University of Bristol and lead author of the paper, said: "We thought that it would be interesting to apply the same methodology to different media and, especially, on a larger time scale. We were initially surprised to see how well periods of positive and negative moods correlated with historical events. The Second World War, for example, is marked by a distinct increase of words related to sadness, and a correspondent decrease of words related to joy."

The same divergence was also found in the use of content-free words, that is words which carry little or no meaning on their own, such as conjunctions ('and', 'but') and articles ('the').
Dr Acerbi said: “This is particularly fascinating because it has recently been shown that differences in usage of content-free words are a signature of different stylistic periods in the history of western literature."

This suggests that the divergence in emotional content between the two forms of English is paired by a more general stylistic divergence.

Co-author Professor Alex Bentley said: “We don't know exactly what happened in the sixties but our results show that this is the precise moment in which literary American and British English started to diverge. We can only speculate whether this was connected, for example, to the baby-boom or to the rising of counterculture.

While the trends found in this study are very clear, their interpretation is still open. "A remaining question," the authors say, "is whether word usage represents real behaviour in a population, or possibly an absence of that behaviour which is increasingly played out via literary fiction. Books may not reflect the real population any more than catwalk models reflect the average body."

Dr Acerbi continued: “Today we have tools that are revolutionising our understanding of human culture and of how it changes through time. Interdisciplinary studies such as this one can detect clear patterns by looking at an unprecedented amount of data, such as tweets, Google trends, blogs, or, in our case, digitised books, that are freely available to everyone interested in them."

The research shows the potential of computer science to help us understand society, added Dr Lampos: “I strongly believe that in the era of "Big Data" interdisciplinary works such as this one enable us to come up with some answers on previously unresolved questions. Computational Social Science, in particular, brings together well-developed scientific fields that in the past were seen as disjoint; the key factor, in this case, is the existence of new forms of data. Such studies can provide a better understanding of our society, which is a significant tool for improvement.”