How to halve the environmental impact of your Christmas dinner

One kilo of protein, from either source, causes more greenhouse gas emissions than a passenger flying from London to New York.

The roast Christmas dinner is a valued tradition for many families in the UK and across the globe.

The health implications and environmental impacts of our diet have now become a regular discussion topic, with sustainable dietary advice recommending that we reduce meat consumption and increase the amount of plant-based proteins, fruits and vegetables we eat.

But what does this practically mean at Christmas? And how can we make our Christmas dinner more sustainable? Here are some tips to help you reduce the environmental impact of your Christmas feast.

The biggest environmental impact of our Christmas dinner comes from the meat.

First things first, it’s important to consider the plant based alternatives now available in supermarkets. Meat and animal products are the largest environmental impact that we can change through our food choices.

Over 900 million livestock animals are bred each year in the UK alone. This figure rises to 56 billion worldwide. Raising this number of animals takes vast amounts of land and water at a time when both of these commodities are becoming more scarce.

This results in vast deforestation and a reduction in global biodiversity. This demand for meat is also changing local farming practices and local culture across the globe.

Animal waste releases harmful gases such as methane which pollute our air, water and soil. It is currently estimated that the farming of livestock is responsible for 14.5 per cent of global greenhouse gases, which is more carbon emissions than all the cars in the world put together.

To put it in the perspective of our Christmas dinner, a kilogram of beef protein reared on a British hill farm can generate the equivalent of 643 kg of carbon dioxide.

A kilogram of lamb protein produced in the same place can generate 749 kg. One kilo of protein, from either source, causes more greenhouse gas emissions than a passenger flying from London to New York.

So one of the most impactful choices you can make is to be sustainability conscious when selecting your meat.

If you do choose meat, thankfully turkey is amongst the least harmful. Turkey is a classic choice for a Christmas dinner, and much lower in embodied greenhouse gas emissions than beef or lamb. 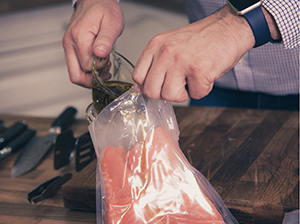 In addition you can purchase smaller mini-roasts and split portions of dark and light meat. Smaller roasts cook faster, lowering the environmental impacts of cooking in an oven.

Cooking in the oven is in fact very energy inefficient. As an alternative to roasting in the oven, there is a method of cooking which can use less than half the energy of a traditional oven method.

Sous vide, which means “under vacuum” in French, involves placing your roast in a vacuumed plastic pouch or bag, and submerging this in a heated water bath for eight hours until the internal temperature of the joint is between 55°C (white meat) to 75°C (dark meat).

The roast is then unwrapped and placed in a hot skillet to sear its surface. This method actually provides the cook with more control of the texture and flavour and can use less than half the energy of a traditional oven method.

If you don’t have a sous vide and this all sounds very technical, the ‘low’ setting on a slow cooker is usually between 55°C and 60°C and so will give you a similar result. Pop your roast in the slow cooker with some water and cook for eight hours (start on Christmas Eve!).

If you make the choice to go meat free or have a smaller amount of meat, you are halving a large environmental impact. 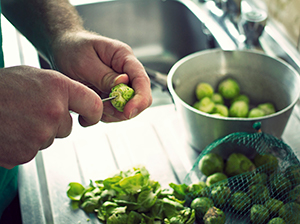 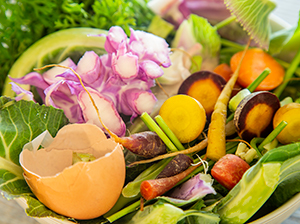 Official figures show that UK households throw away seven million tonnes of food every year, but research from 2016 showed householders are more likely to throw away food over the festive season because they don’t know how to prepare and cook it.

One solution is to keep portion sizes small, with minimal left overs, and try not to be too ambitious with the number of dishes.

Use these tips and you could cut the environmental impacts associated with your Christmas dinner in half.