EU students at UK universities generate £3.7bn for the UK economy and support over 34,000 jobs in all corners of the country, according to analysis from Universities UK. 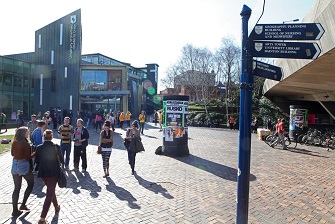 The analysis (which is based on 2011–12 student number figures) shows that:

The analysis showed the impact of EU students across all regions and nations of the UK:

Commenting on the figures, Dame Julia Goodfellow, President of Universities UK and Vice-Chancellor of the University of Kent, said: "EU students make an enormous contribution to British university life and local communities. The figures show clearly that EU students spend money and create jobs in all regions and corners of the UK. EU students also make a very important academic and cultural contribution to university life, creating an international, outward-looking culture on campuses which, in turn, benefits UK students.

“Leaving the EU and putting up barriers to work and study makes it more likely that European students and researchers will choose to go elsewhere, strengthening our competitors and weakening the UK’s universities."

Professor Sir Keith Burnett, Vice-Chancellor of the University of Sheffield, said: "The talented students who travel from across the globe to study in the UK are a true asset to our country. Today's figures make clear that our university and region have benefited enormously from the outstanding EU students who come to study here.

'I have taught exceptional students from across Europe for many years. I have seen them make an enormous contribution across all subjects, volunteer to support local charities and build friendships with UK students which often last a lifetime. Their economic impact is also profound, supporting local businesses and creating jobs."

Universities and Science Minster Jo Johnson said: “Our success as a knowledge economy hinges on our ability to collaborate with the best minds from across Europe and the world.

“It would be reckless to cut ourselves off from the rich sources of EU funding, the access to valuable shared research facilities and the close institutional ties that provide so many opportunities to British students and academics.

“UK students benefit from their ability to study across the EU, while EU students generate billions for the UK economy, support thousands of jobs and enrich university life. I share the clear view of my predecessors and the majority of university leaders that our world-class universities and our scientific prowess will be much better off inside the EU.”