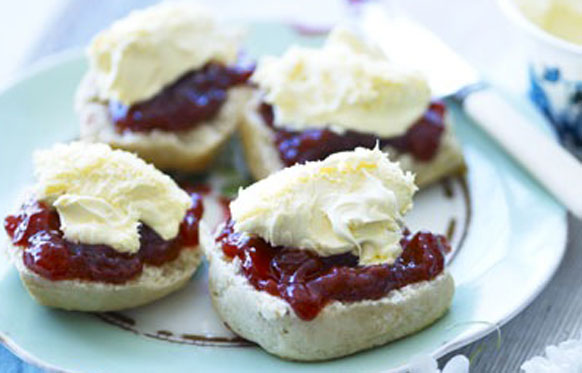 Rodda’s Cornish Clotted Cream asked if expert Dr Eugenia Cheng from the University of Sheffield’s School of Mathematics and Statistics – who is renowned for using food to explain complicated maths to her students in schools and in lectures – could develop the first ever mathematical formula to create the perfect cream tea. The key elements of a cream tea were assessed; scones cream and jam.

The research and resulting formula was based on a suggested ratio of 2:1:1 (by weight). For example the average scone weighing 70g would require 35g of jam and 35g of cream. 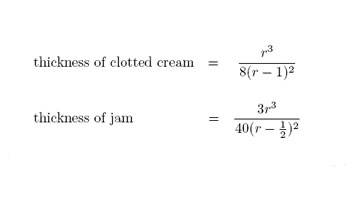 With this in mind Dr Cheng’s research concluded:

• Clotted cream is better than whipped cream, primarily due to the excessive volume size of whipped cream required.

• The total thickness of the scone, with all its elements, should be around 2.8cm*. This provides a relaxed open width of the mouth.

• Jam, due to its density, needs to be spread prior to the application of the clotted cream.

• Putting it on after the cream may cause the jam to run off – creating sticky fingers.

• The thickness of the cream should also not be thicker than the scone, as the scone will become off balance whilst trying to eat it.

Nicholas Rodda, Managing Director of Rodda’s, the world’s oldest producer of Cornish Clotted Cream, which commissioned the study says: “For a perfect cream tea, you need to have the right quantities of each ingredient and prepare them in the right way. The aim of this formula is to help ensure that no matter where you are in the country you should always be able to enjoy the perfect serve for a cream tea. It’s simply about the winning formula for these traditional ingredients; jam and scone, with Cornish clotted cream being the essential crowning glory.”

Dr Eugenia Cheng, from the University of Sheffield’s School of Mathematics and Statistics added: “Building a good scone is like building a good sandcastle – you need a wider base, and then it needs to get narrower as it goes up so that it doesn’t collapse or drip.

"A rim of around 5mm is required around the jam, to prevent mess, and then a further rim of 5mm for when the cream is placed on top of the jam.

"This formula shows that maths is relevant in our everyday world, and that maths can give us a logical explanation for something we've discovered by "gut" feeling, like that clotted cream is better than whipped cream!”

A further important finding, backed up the equation, is that regardless of scone size it is always important to use clotted cream rather than whipped. This is because for a small scone (under 5cm) to get the correct weight ratio, whipped cream would be thicker than the scone, making the whole thing off balance. When using whipped cream with a scone larger however, the total thickness is too high to fit in the average mouth. Therefore, these findings are conclusive in suggesting that regardless of scone size, clotted cream is always preferable to whipped.

The new formula, presented in all its cream tea glory, will be showcased at The Royal Cornwall Show.

School of Maths and Statistics: https://www.sheffield.ac.uk/maths