Factory 2050 has been named Project of the Year at the Constructing Excellence Awards. 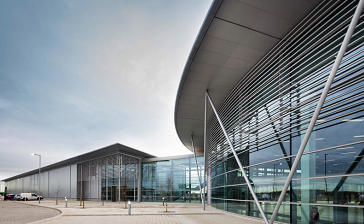 The revolutionary, glass-walled reconfigurable factory, which sits at the heart of the University of Sheffield’s new advanced manufacturing campus, was recognised at the regional awards ceremony on Friday (1 July 2016) in Leeds.

Architects Bond Bryan and construction group Interserve who worked on the landmark building together will now go through to the national finals later in the year.

Executive Chair of the Advanced Manufacturing Research Centre (AMRC), Professor Keith Ridgway, said: “We are delighted that Factory 2050 has been recognised in this way. The whole project is about innovation in manufacturing and new ways of working in the future. This was captured by the architects and builders and we are delighted with the result.”

Factory 2050 is home to the AMRC’s Integrated Manufacturing Group (IMG), which has installed cutting-edge manufacturing and assembly technologies, advanced robotics, flexible automation, next generation man-machine interfaces and new programming and training tools to drive its research.

Ben Morgan, Head of IMG and Factory 2050, said: “We are thrilled to hear this news and it is credit to the project team behind the build. Factory 2050 through its design and innovation is allowing the AMRC Integrated Manufacturing Group to develop and deliver cutting edge technology to industry throughout the UK and beyond.”

Factory 2050 opened late last year as part of the Advanced Manufacturing Research Centre (AMRC) with Boeing. It is now operational and has 45 staff and a full workload.

Initial projects include a programme to take aerospace manufacturing technology into the construction industry, explore future digital factory technologies for building commercial aeroplanes and investigate digitally assisted assembly technologies which could help to fill a looming skills gap in the aerospace sector.

Factory 2050 aims to repeat the success of the AMRC’s Factory of the Future by attracting advanced manufacturers and highly-skilled engineering jobs to the new Advanced Manufacturing Innovation District – a driving force for development in the Sheffield City Region.

The site will continue to grow, and recruit up to 70 staff, including talented young engineers who will have access to some of the most advanced reconfigurable manufacturing technologies the world has to offer.

Factory 2050 is a £43 million development, part funded by the European Regional Development Fund and the Higher Education Funding Council for England, each of which have contributed £10 million to the project.

The University of Sheffield
With almost 27,000 of the brightest students from over 140 countries, learning alongside over 1,200 of the best academics from across the globe, the University of Sheffield is one of the world’s leading universities.
A member of the UK’s prestigious Russell Group of leading research-led institutions, Sheffield offers world-class teaching and research excellence across a wide range of disciplines.
Unified by the power of discovery and understanding, staff and students at the university are committed to finding new ways to transform the world we live in.
Sheffield is the only university to feature in The Sunday Times 100 Best Not-For-Profit Organisations to Work For 2016 and was voted number one university in the UK for Student Satisfaction by Times Higher Education in 2014. In the last decade it has won four Queen’s Anniversary Prizes in recognition of the outstanding contribution to the United Kingdom’s intellectual, economic, cultural and social life.
Sheffield has five Nobel Prize winners among former staff and students and its alumni go on to hold positions of great responsibility and influence all over the world, making significant contributions in their chosen fields.
Global research partners and clients include Boeing, Rolls-Royce, Unilever, AstraZeneca, Glaxo SmithKline, Siemens and Airbus, as well as many UK and overseas government agencies and charitable foundations.