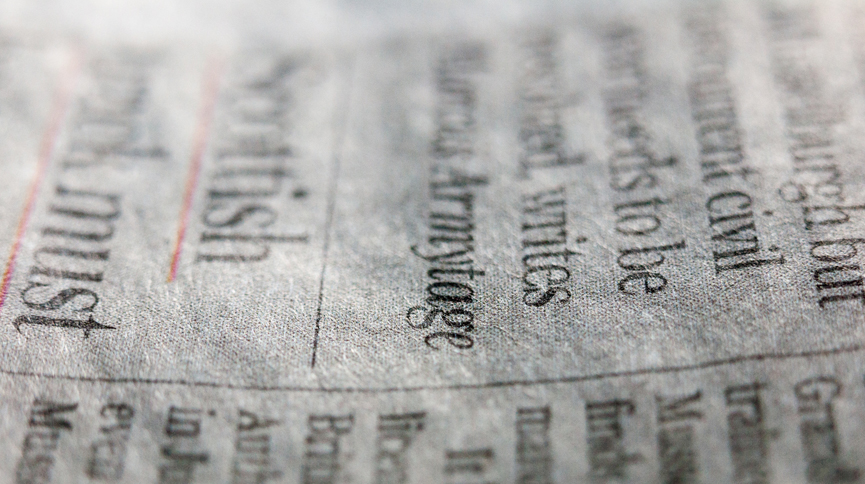 Politicians and local journalists can play a key role in fighting the rise in ‘fake news’, according to new research from the University of Sheffield.

The submission to the UK House of Commons Digital, Culture, Media and Sport Committee’s Fake News inquiry, by Dr Paul Reilly from the University’s Information School, reveals the key role that local journalists play in debunking rumours, mis-and disinformation in their coverage of contentious episodes in Northern Ireland, such as the 2013 union flag protests and the 2014 and 2015 Ardoyne parade disputes.

There were many examples of social media being used to spread rumours, mis-and disinformation about the Ardoyne parade dispute, which saw unionists and loyalists react angrily to the decision of the Northern Ireland Parades Commission to reroute a contentious Orange Order parade away from the nationalist Ardoyne district in North Belfast.

Despite fears of a repeat of the violent clashes between loyalists and the Police Service of Northern Ireland (PSNI) seen in July 2013, the 2014 parade would pass off without incident. Conversely, the 2015 parade would again be marred by violence as loyalist rioters clashed with PSNI officers, who prevented the marchers from returning home via their traditional route. Dr Reilly’s study of 7,388 tweets posted during the two incidents revealed that rumours, mis-and disinformation about the contentious parade had a very short life span.

Among the examples of ‘fake news’ shared on social media during the 2014 parade impasse was a picture of a nationalist protestor holding aloft a placard with a mock road sign declaring that the Orange Order was not welcome in the area. However, this was quickly debunked by citizens who shared an image posted BBC journalist Kevin Sharkey which revealed the placard had in fact read “Love Thy Neighbour”.

Similarly, the submission also highlights how Chief Constable George Hamilton was the subject of rumours and misinformation during the 2015 parade. A viewer of Russia Today’s live stream of the standoff between loyalists and the PSNI would tweet that they had seen a senior police officer resembling the Chief Constable being injured by an object thrown by one of the rioters. This misinformation was corrected within a few hours by local journalist Rodney Edwards, who confirmed he had spoken to Hamilton and he had not been present at the scene during the incident.

Dr Reilly said: “While citizens played a role in sharing tweets that corrected rumours, mis-and disinformation shared on social media during these incidents, it is clear that professional journalists have a critical role to play in factchecking such claims and amplifying corrections and debunks.”

Other key points from Dr Reilly’s submission to the Fake News inquiy relate to the terminology used by politicians and the news media to describe such activity. He argues that the term ‘fake news’ fails to capture the complexities of how false information is created and shared via social media.

Dr Reilly added: “Fake news has become something of a ‘floating signifier’ – a term that can be weaponised by political groups to discredit news coverage that they disagree with. It also fails to capture the nuances of a spectrum of activity on social media that might be broadly defined as ‘false information;’ This ranges from the relatively benign behaviour of parody social media accounts that poke fun at our politicians to the more malevolent and sinister use of ‘troll farms’ to manufacture news with the intention of sowing confusion and disunity within democracies.”

The submission calls for politicians to refrain from using the term ‘fake news’ when trying to discredit what they perceive as hostile or negative media coverage. Such complaints about unfair or biased coverage should be addressed to media regulators such as Ofcom.

Elected officials should publicly reaffirm their commitment to press freedom to help rebuild public trust in democratic institutions, according to the research. The submission also calls on policy makers to intervene to ensure the survival of local journalism ahead of the UK government’s review into the newspaper industry.

For more information about the submission, visit: http://data.parliament.uk/writtenevidence/committeeevidence.svc/evidencedocument/digital-culture-media-and-sport-committee/fake-news/written/82163.html

For more information about the study of how local journalists helped to debunk rumours, mis-and disinformation in Northern Ireland, visit: http://nsmnss.blogspot.com/2018/04/rumours-mis-and-disinformation-in.html