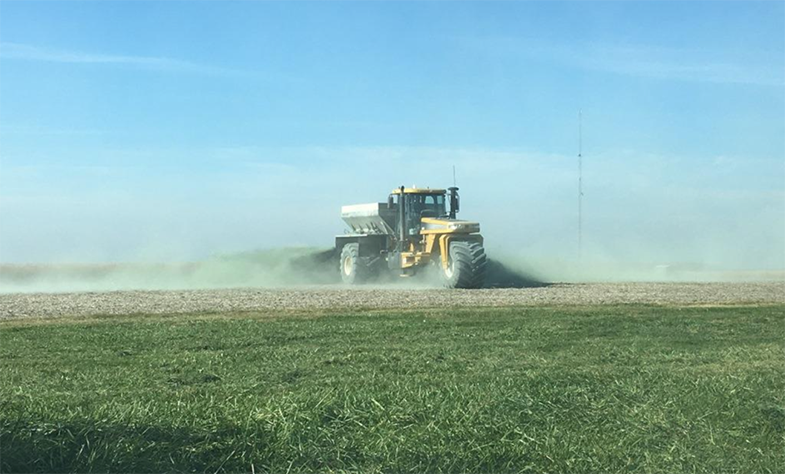 Farming crops with crushed rocks could help to improve global food security and capture CO2 from the atmosphere, a new study has found.

The pioneering research by scientists at the University of Sheffield together with international colleagues suggests that adding fast-reacting silicate rocks to croplands could capture CO2 and give increased protection from pests and diseases while restoring soil structure and fertility.

Professor David Beerling, Director of the Leverhulme Centre for Climate Change Mitigation at the University of Sheffield and lead author of the research, said: “Human societies have long known that volcanic plains are fertile, ideal places for growing crops without adverse human health effects, but until now there has been little consideration for how adding further rocks to soils might capture carbon.

“This study could transform how we think about managing our croplands for climate, food and soil security. It helps move the debate forward for an under-researched strategy of CO2 removal from the atmosphere - enhanced rock weathering - and highlights supplementary benefits for food and soils.

“The magnitude of future climate change could be moderated by immediately reducing the amount of CO2 entering the atmosphere as a result of burning fossil fuels for energy generation. Adopting strategies like this new research that actively remove CO2 from the atmosphere would contribute this effort and could be adopted rapidly.”

The research, published today (19 February 2018) in Nature Plants, examined the approach which involves amending soils with abundant crushed silicate rocks, like basalt, left over from ancient volcanic eruptions. As these minute rock grains dissolve chemically in soils, they take up carbon dioxide and release plant-essential nutrients.

Critically, enhanced rock weathering works together with existing managed croplands. Unlike other carbon removal strategies being considered, it doesn’t compete for land used to grow food or increase the demand for freshwater. Other benefits include reducing the usage of agricultural fertilizers and pesticides, lowering the cost of food production, increasing the profitability of farms and reducing the barriers to uptake by the agricultural sector.

Crushed silicate rocks could be applied to any soils, but arable land is the most obvious because it is worked and planted annually. It covers some 12 million square kilometres or 11 per cent of the global land area.
Arable farms already apply crushed rock in the form of limestone to reverse acidification of soils caused by farming practices, including the use of fertilizers. Managed croplands, therefore, have the logistical infrastructure, such as the road networks and machinery, needed to undertake this approach at scale. These considerations could make it straight forward to adopt.

Professor Stephen Long at the University of Illinois Champaign-Urbana, and co-author of the study added: “Our proposal is that changing the type of rock, and increasing the application rate, would do the same job as applying crushed limestone but help capture CO2 from the atmosphere, storing it in soils and eventually the oceans.

“Global warming is a problem that affects everyone on the planet. Scientists generally have done a poor job of getting across the point that the world must reduce emissions of greenhouse gases from fossil fuels and combine this with strategies for extracting carbon dioxide from the atmosphere to avoid a climate catastrophe.

Professor James Hansen from the Earth Institute at Columbia University and co-author of the work, added: “Strategies for taking CO2 out of the atmosphere are now on the research agenda and we need realistic assessment of these strategies, what they might be able to deliver, and what the challenges are.”

The Department of Animal and Plant Sciences
The Department of Animal and Plant Sciences at the University of Sheffield is home to one of the biggest communities of whole-organism biologists in the UK. Their research covers animals, plants, humans, microbes, evolution and ecosystems, in habitats ranging from the polar regions to the tropics. This work aims to shed new light on the fundamental processes that drive biological systems and help solve pressing environmental problems. Researchers and students work closely with organisations ranging from the UK Environment Agency and the Royal Horticultural Society, to Heineken and Shell, with every student given the opportunity go on an optional field course between second and third year to habitats ranging from the Peak District to Tanzania. Second year students are also given the chance to make wildlife documentaries with the help of BBC film makers. Find out more at www.sheffield.ac.uk/aps.