Fathering offspring is more than just a race to the egg

The chance of a male fathering offspring may not be a simple race to the egg, but is influenced by the length of the male’s sperm, say scientists from the University of Sheffield.

Using a captive population of zebra finches, the researchers carried out sperm competition experiments between pairs of males, where one male consistently produced long sperm and the other male always produced short sperm. These experiments showed that more long sperm reached and fertilised the eggs compared to short sperm. The long sperm advantage was evident even when the short sperm males mated with the females first, and were effectively given a ‘head start’. 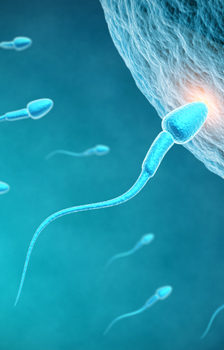 The findings demonstrate that in birds, in a competitive scenario, the fertilisation success of a male can be influenced by the length of his sperm. The results also suggest that the final outcome of sperm competition may be partly dependent on the female bird.

Dr Clair Bennison from the University’s Department of Animal and Plant Sciences, said: “We know that in the zebra finch, long sperm swim faster than short sperm, so we might expect longer, faster swimming sperm to simply reach the egg first. However, this reasoning does not explain why long sperm outcompete short sperm in our study. Long sperm win at sperm competition, by fertilising more eggs, even when short sperm are given a head-start.”

Scientists at the University allowed each pair of male zebra finches to mate with a female bird so that the long and short sperm from the males could compete to fertilise the female’s eggs. Female birds store sperm inside their bodies for many days, and this is one way that the females themselves could influence the fertilisation success of the males. It is possible that long sperm are better at reaching and and staying inside these storage areas than short sperm. Long sperm may even be 'preferred' by the female, by some unknown process.

Dr Bennison, added: “Our findings are important because they demonstrate for the first time in birds, using a controlled competitive scenario, that sperm length can influence the fertilisation success of a particular male. The results also add to the body of evidence suggesting that the final outcome of sperm competition may be partly dependent on the female, and that the chance of a male siring offspring may not be an outcome of a simple ‘race to the egg’.”

Scientists believe that a better understanding of how sperm length influences fertilisation success in non-human animals such as the zebra finch may point us in new directions for investigation in human fertility research.

Researchers now plan to investigate if sperm storage duration in female birds varies according to the length of the male’s sperm, and the possible mechanisms responsible for this.

The paper, published in the journal Proceedings of the Royal Society B, can be viewed online by visiting: http://rspb.royalsocietypublishing.org/lookup/doi/10.1098/rspb.2014.1897