Men with more brothers than sisters may have faster swimming sperm and are more likely to have increased fertility according to new research carried out by experts from the University of Sheffield.

Scientists from the University of Sheffield in collaboration with researchers at Brown University in America found a correlation between the swimming speed of a man’s sperm and the number of brothers he has.

The findings, reported online in the Asian Journal of Andrology, support previous theory that parents with genes for good male fertility are more likely to have boys. 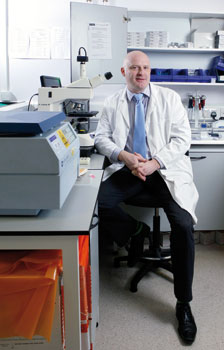 Dr Allan Pacey, Senior Lecturer in Andrology at the University of Sheffield, said: “The results are very surprising and could provide genetic insights into why some men are more fertile than others but at the moment have no clinical relevance to how we might manage and treat male infertility. It does, however, give food for thought about the importance of genetics for sperm motility and may open the way to more studies in this area.”

In a study of 500 men attending semen analysis as part of infertility investigations, the team used sophisticated computer technology to accurately measure how fast the men’s sperm swam and then correlated this information with how many brothers or sisters each had in his family.

When the data were analysed, the researchers were surprised to find that men with mostly brothers had faster sperm than men with mostly sisters. Although this does not mean that siblings directly influence sperm, there is a correlation which could offer an insight into how different sperm speeds in men have evolved.

Dr Jim Mossman, Postdoctoral Researcher at Brown University, who collected the data during his PhD studies in Sheffield and who led the research said: “This is certainly not a smoking gun as a reason for infertility in men. However, it would be interesting to test whether the same relationships are observed in other human populations as well as in other species. Likewise, would we observe similar associations when looking at female fertility? If the relationship between sex-bias in the number of children and fertility is a more universal phenomenon, then we may expect female fertility to follow a similar pattern, albeit in the opposite direction.”

Jon Slate, Professor of Evolutionary Genetics at the University of Sheffield added: “We are very intrigued by this finding and hope other researchers examine their datasets in a similar fashion. If our results can be replicated we think it provides some evidence that humans have experienced what evolutionary biologists like to call ‘sexual conflict’. The idea behind this is that genes that make males reproductively successful make females reproductively unsuccessful and vice versa.”