Scientists at the University of Sheffield are launching a pioneering study to investigate if a simple extra nutrient can boost male fertility. 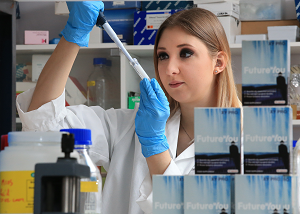 Studies have already shown that lycopene, the red pigment compound found most readily in sun-ripened tomatoes, can boost sperm count by up to 70 per cent, as well as conferring other benefits on the male reproductive system.

It is estimated that one in six couples are unable to conceive – in about half of cases the problem is caused by poor sperm quality.

Professor Pacey said: “Studies elsewhere in the world have shown that the antioxidant properties of lycopene seem to have a beneficial effect on sperm quality and we want to investigate this further.

“Production of sperm takes three months. This study will tell us if lycopene improves the quality of sperm already in development by reducing DNA damage, and whether it produces an overall increase in the number of mature sperm produced overall.

“There is enough evidence out there to indicate this study is worth doing and I am cautiously optimistic. If it works in the volunteers we would then consider testing it in infertile patients.”

The initiative follows a similar study led by Ashok Agarwal, director of the Cleveland Clinic’s Center for Reproductive Medicine in the USA, which indicated lycopene supplementation could raise sperm count by up to 70 per cent (Durairajanayagam et al. 2014).

A number of other research studies have also shown lycopene may slow the progression of cancer of the prostate, the gland that makes seminal fluid.

Dr Williams, who is an expert in designing trials to observe the health effects of diet, said: “Little work has been done in this area, but if lycopene has a beneficial effect on the prostate, it is reasonable to think it might also improve sperm function.”

The Sheffield study, which is starting today (11 April), will involve 60 male volunteers aged between 18 and 30.

Half of the volunteers will take two 7mg capsules per day of a highly absorbable form of lycopene supplement containing lactolycopene while the other half will take identical dummy capsules.

All volunteers will provide three sperm and blood samples to check lycopene levels and to see if some individuals absorb lycopene more readily than others.

To avoid the risk of bias, neither the volunteers nor the researchers will know who has received the active capsules and who has received the dummy treatment, until the results are analysed. Volunteers will not be given any personal information about their sperm count or potential fertility.

The over-the-counter lactolycopene supplement, called XY Pro being used for the study, has been chosen because of previous scientific papers showing its lycopene formulation is very readily absorbed.

“We don’t want XY Pro to be classed as just another health supplement with vague potential benefits,” said Nigel Iskander, spokesman for Cambridge Nutraceuticals, the Cambridge University spin off which manufactures XY Pro.

“We know this compound is very beneficial and we are anxious to garner as much scientific evidence as possible for its use.”

With almost 27,000 of the brightest students from over 140 countries, learning alongside over 1,200 of the best academics from across the globe, the University of Sheffield is one of the world’s leading universities. A member of the UK’s prestigious Russell Group of leading research-led institutions, Sheffield offers world-class teaching and research excellence across a wide range of disciplines. Unified by the power of discovery and understanding, staff and students at the university are committed to finding new ways to transform the world we live in. Sheffield is the only university to feature in The Sunday Times 100 Best Not-For-Profit Organisations to Work For 2016 and was voted number one university in the UK for Student Satisfaction by Times Higher Education in 2014. In the last decade it has won four Queen’s Anniversary Prizes in recognition of the outstanding contribution to the United Kingdom’s intellectual, economic, cultural and social life. Sheffield has five Nobel Prize winners among former staff and students and its alumni go on to hold positions of great responsibility and influence all over the world, making significant contributions in their chosen fields. Global research partners and clients include Boeing, Rolls-Royce, Unilever, AstraZeneca, Glaxo SmithKline, Siemens and Airbus, as well as many UK and overseas government agencies and charitable foundations.