Delicate porcelain vessels stand on a shelf, obscured by frosted glass. These vessels tell a story. A story of homecoming.

For world-renowned ceramicist Edmund de Waal that story is personal. He is the son of a refugee.

In 1939 his Jewish father, then just a boy, aged nine, fled Vienna with his uncle. Their home had been ravaged by the Nazis. Carrying nothing with them but a single suitcase, they gained visas and sought sanctuary in England.

Perhaps inevitably, ideas of homelessness, exile and belonging have long influenced Edmund’s works, which are displayed in galleries across the world.

So when the Sheffield alumnus and honorary graduate learnt about the University of Sheffield’s long-standing tradition of welcoming refugee staff and students, he wanted to do something to honour it.

He offered the University a gift. A new piece of art called fetched home – inspired by a line in a poem by Jewish German poet Paul Celan called Homecoming.

“What I do is I make pots,” said the 51-year-old, shortly before unveiling his work in Western Bank Library.

“I thought very hard about what I wanted to do for us here – for Sheffield – and I was thinking about ideas around people and books and migration and homecoming.

“I’ve been working for a really long time with the poetry of this really amazing German poet, Celan. He was an extraordinary refugee – an exile, whose family was killed in the Holocaust.

“He wrote in German and French but writes all the time about homecoming. So that’s what I tried to do.

“The glass is slightly opaque – it’s misty – so things are present and you can see them, but you can’t particularly focus on them. You can’t quite work them out.

“I wanted to evoke a feeling about something really important which is difficult to get hold of, but is very present.”

The reality is universities have always been international and have always thrived and grown by accepting scholars from all around the world – from accommodating them, cherishing them and loving them - and saying that.

It is something very present at the University, which has a rich history of welcoming refugees into a City of Sanctuary.

But it wants to welcome even more refugee scholars and students, who will, in turn, be able to give back to communities.

That is why it is dedicated to supporting refugees, through scholarships, fundraising and opening new opportunities, and building a truly international community.

This work, Edmund says, is “critical”.

“My own story is that I’m the child of a refugee and a lot of my work – the books I’ve written and the exhibitions and art I’ve done – have been international,” he said.

“It’s about where you come from, belonging and homelessness.

“The reality is universities have always been international and have always thrived and grown by accepting scholars from all around the world – from accommodating them, cherishing them and loving them - and saying that.

Asked if he believes universities should take a key role in supporting refugees, he said: “I do.

“It’s partly because the political agenda is so complicated at the moment that leadership around the welcome and the value of refugee communities has to be taken by someone. If you look at the history of universities, there’s a history of institutions that have been reinvigorated, generation to generation, by welcoming people from different countries and their families. It is something universities should be doing.

“Everyone knows that the thing every parent wants is an education for their kids – it is by far the most profound thing you’ll ever want your kids to have. So to make that clear as the offer to those around you is very important.”

Video: Rewatch Edmund de Waal's '‘On the Eve of Departure: Homelessness, Exile and Art’ lecture from the University’s Festival of Arts and Humanities

The refugee crisis, and the government response to it, is something which provokes a lot of emotion in Edmund.

It’s a dreadful thing, the lessening effect of repetition, so there have to be new ways of bringing things alive and back to your consciousness and where you are.

“I’m absolutely appalled by the failure to engage with the scale of what’s going on, by the failure to understand this historical moment, by the brutality of the rhetoric. To backtrack on 3,000 refugee children? I go back to history. I wouldn’t exist if Britain hadn’t allowed some Jewish refugees in in 1938 and 1939. I wouldn’t be here.

“Toxic political rhetoric is stopping the decent thing being done.”

One of the most powerful images we have seen this year has been the sight of thousands of refugees making the long walk from countries where they fear for their lives to what they hope will be a new life for them and their families.

But Edmund said the repetition of these images in the media mean we need to find new ways to express the real human plight.

He chooses to do this through his art and writing.

“How many times can you read a newspaper article or see something on television and it still have an impact on you?” he said.

“It’s a dreadful thing, the lessening effect of repetition, so there have to be new ways of bringing things alive and back to your consciousness and where you are.

“Writing and art are other ways of doing it.” 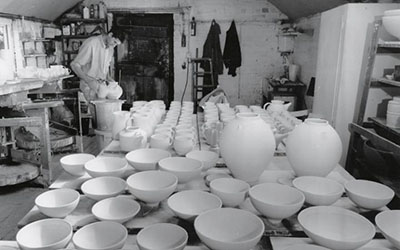 Edmund made his first pots when he was just five years old, taking an evening class at Lincoln School of Art.

His time in Sheffield began in 1987, when he set up his first studio in the shadow of Wincobank Hill in the struggling community of Page Hall.

“It was a really tough time in the city’s history,” he said.

“I moved down to Page Hall which was going through a severe period of depression and set up my first ever studio there trying to make porcelain.

“It was the cheapest place I could find in the whole of England and I was absolutely penniless. I knew absolutely no one. But I moved to the city, set up there and began.

Then, in the early 1990s, Edmund spotted an advert for a scholarship to study a postgraduate diploma in Japanese at the University of Sheffield.

“It was the beginning of a journey and I made some incredible friendships there in my neighbourhood. Sheffield has always had an incredible arts community – lots and lots of people who are here for all kinds of reasons.”

“I had a previous history with Japan, he said.

“I ran away to Japan when I was 17, so I had already lived there. But to have the opportunity to go back to Japan with Japanese language skills was absolutely incredible. I’m not a linguist and I have to say they the University did its very best –they really, really tried! I was possibly the worst Japanese language candidate they’ve ever had to suffer with!

“But it worked in the sense I got my diploma. And it got me back to Japan with language skills, which was incredible.”

Reflecting on his return to the University, now as alumni, Edmund has noticed a change.

“The University is more open, he said.

“It’s bigger, of course, but its openness is what I would really applaud. The way it presents itself to the world is very different. No other university is doing this and it makes me really proud.”

By Hannah Postles, Media Relations Officer, The University of Sheffield