Scientists at the Universities of Sheffield and Sussex are embarking on an ambitious project to produce the first accurate computer models of a honey bee brain in a bid to advance our understanding of Artificial Intelligence (AI), and how animals think. 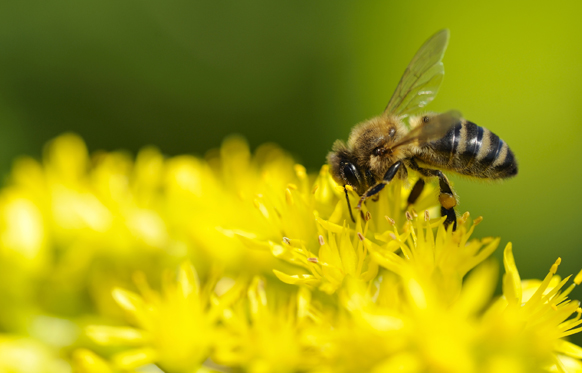 The team will build models of the systems in the brain that govern a honey bee's vision and sense of smell. Using this information, the researchers aim to create the first flying robot able to sense and act as autonomously as a bee, rather than just carry out a pre-programmed set of instructions.

If successful, this project will meet one of the major challenges of modern science: building a robot brain that can perform complex tasks as well as the brain of an animal. Tasks the robot will be expected to perform, for example, will include finding the source of particular odours or gases in the same way that a bee can identify particular flowers.

It is anticipated that the artificial brain could eventually be used in applications such as search and rescue missions, or even mechanical pollination of crops.

Dr James Marshall, leading the £1 million Engineering and Physical Sciences Research Council (EPSRC) funded project in Sheffield, said: "The development of an artificial brain is one of the greatest challenges in Artificial Intelligence. So far, researchers have typically studied brains such as those of rats, monkeys, and humans, but actually 'simpler' organisms such as social insects have surprisingly advanced cognitive abilities."

Called 'Green Brain,' and partially supported with hardware donated by NVIDIA Corporation, the project invites comparison with the IBM-sponsored Blue Brain initiative, which is developing brain modelling technologies using supercomputers with the ultimate goal of producing an accurate model of a human brain.

The hardware provided by NVIDIA is based on high-performance processors called 'GPU accelerators' that generate the 3D graphics on home PCs and games consoles and power some of the world’s highest-performance supercomputers. These accelerators provide a very efficient way of performing the massive calculations needed to simulate a brain using a standard desktop PC – rather than on a large, expensive supercomputing cluster.

"Using NVIDIA's massively parallel GPU accelerators for brain models is an important goal of the project as they allow us to build faster models than ever before," explained Dr Thomas Nowotny, the leader of the Sussex team. "We expect that in many areas of science this technology will eventually replace the classic supercomputers we use today."

Green Brain's researchers anticipate that developing a model of a honey bee brain will offer a more accessible method of driving forward our knowledge of how a brain’s cognitive systems work, leading to advances in understanding animal and human cognition. "Because the honey bee brain is smaller and more accessible than any vertebrate brain, we hope to eventually be able to produce an accurate and complete model that we can test within a flying robot," said Dr Marshall.

"Not only will this pave the way for many future advances in autonomous flying robots, but we also believe the computer modelling techniques we will be using will be widely useful to other brain modelling and computational neuroscience projects," added Dr Nowotny.

Alongside this, the research is expected to provide a greater understanding of the honey bee itself. Because of their role as pollinators, honey bees are vital to many ecosystems, yet their declining population in recent years has given scientists cause for concern. Green Brain’s modelling could help scientists to understand why honey bee numbers are dwindling and also contribute to the development of artificial pollinators, such as those being researched by the National Science Foundation-funded Robobees project, led by Harvard University.

The University of Sheffield’s Faculty of Engineering

The Faculty of Engineering at the University of Sheffield - the 2011 Times Higher Education’s University of the Year - is one of the largest in the UK. Its seven departments include over 4,000 students and 900 staff and have research-related income worth more than £50M per annum from government, industry and charity sources. The 2008 Research Assessment Exercise (RAE) confirmed that two thirds of the research carried out was either Internationally Excellent or Internationally Leading.

The University of Sussex

Founded in 1961, the University of Sussex is among the leading 30 research universities in the UK, with 90 per cent of its research rated as world leading, internationally excellent or internationally recognised (RAE 2008). The Times Higher Education World University Rankings 2011 rank Sussex as 12th in the UK, 31st in Europe and 99th in the world.

The University of Sussex has over 12,000 students, of which over 3,000 are postgraduates and 2,200 staff, from more than 120 countries. The University has counted among its faculty three Nobel Prize winners, 13 Fellows of the Royal Society, six Fellows of the British Academy and a winner of the prestigious Crafoord Prize.

International in its outlook and interdisciplinary in its approach, Sussex is based on a single campus, designed by Sir Basil Spence, in rolling parkland between the seaside city of Brighton and the South Downs National Park. Sussex research tackles major world issues, with leading areas of expertise such as climate change and development studies.

The Engineering and Physical Sciences Research Council (EPSRC) is the UK’s main agency for funding research in engineering and physical sciences. EPSRC invests around £800m a year in research and postgraduate training, to help the nation handle the next generation of technological change.

The areas covered range from information technology to structural engineering, and mathematics to materials science. This research forms the basis for future economic development in the UK and improvements for everyone’s health, lifestyle and culture. EPSRC works alongside other Research Councils with responsibility for other areas of research. The Research Councils work collectively on issues of common concern via research Councils UK.