Researchers from the University of Sheffield have found vital new evidence on how to target and reverse the effects caused by one of the most common genetic causes of Parkinson’s.

Mutations in a gene called LRRK2 carry a well-established risk for Parkinson’s disease, however the basis for this link is unclear. 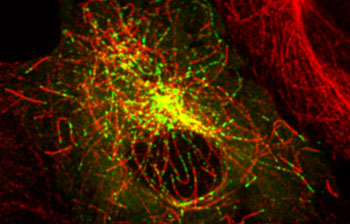 These drugs, deacetylase inhibitors, target the transport system and reverse the defects caused by the faulty LRRK2 within nerve cells. The study is published today (15 October 2014) month in Nature Communications.

Co-investigator Dr Alex Whitworth explained: “We could also show that these neuronal transport defects caused by the LRRK2 mutation are reversible.

“By targeting the transport system with drugs, we could not only prevent movement problems, but also fully restore movement abilities in fruit flies who already showed impaired movement marked by a significant decrease in both climbing and flight ability.”

The LRRK2 gene produces a protein that affects many processes in the cell. It is known to bind to the microtubules, the cells’ transport tracks. A defect in this transport system has been suggested to contribute to Parkinson’s disease. The researchers have investigated this link and have now found the evidence that certain LRRK2 mutations affect transport in nerve cells which leads to movement problems observed in the fruit fly (Drosophila).

The team then used several approaches to show that preventing the association of the mutant LRRK2 protein with the microtubule transport system rescues the transport defects in nerve cells, as well as the movement deficits in fruit flies.

Dr De Vos added: “We successfully used drugs called deacetylase inhibitors to increase the acetylated form of α-tubulin within microtubules which does not associate with the mutant LRRK2 protein. We found that increasing microtubule acetylation had a direct impact on cellular axonal transport.
“These are very promising results which point to a potential Parkinson’s therapy. However, further studies are needed to confirm that this rescue effect also applies in humans.“

Dr Beckie Port, Research Communications Officer at Parkinson’s UK, which helped to fund the study, said: “This research gives hope that, for people with a particular mutation in their genes, it may one day be possible to intervene and stop the progression of Parkinson’s.

“The study has only been carried out in fruit flies, so much more research is needed before we know if these findings could lead to new treatment approaches for people with Parkinson’s.”

About Parkinson’s UK
Every hour, someone in the UK is told they have Parkinson's.
It affects 127,000 people in the UK - which is around one in 500 of the population.
Parkinson's is a degenerative neurological condition, for which there currently is no cure. The main symptoms of the condition are tremor, slowness of movement and rigidity.
Parkinson's UK is the UK's leading charity supporting those with the condition. Its mission is to find a cure and improve life for everyone affected by Parkinson's through cutting edge research, information, support and campaigning.
For advice, information and support, visit www.parkinsons.org.uk or call our free, confidential helpline on 0808 800 0303.

The Sheffield Institute for Translational Neuroscience (SITraN)
SITraN is a world-leading centre for research into neurodegenerative diseases including motor neurone disease (MND/ALS), Parkinson’s disease and Alzheimer’s disease. The purpose-built facility uniquely allows the multidisciplinary collaboration of clinicians, scientists and health professionals to develop new treatments for the benefit of patients.
To find out more visit www.sheffield.ac.uk/sitran/

With almost 26,000 of the brightest students from around 120 countries, learning alongside over 1,200 of the best academics from across the globe, the University of Sheffield is one of the world’s leading universities. A member of the UK’s prestigious Russell Group of leading research-led institutions, Sheffield offers world-class teaching and research excellence across a wide range of disciplines. Unified by the power of discovery and understanding, staff and students at the university are committed to finding new ways to transform the world we live in. In 2014 it was voted number one university in the UK for Student Satisfaction by Times Higher Education and in the last decade has won four Queen’s Anniversary Prizes in recognition of the outstanding contribution to the United Kingdom’s intellectual, economic, cultural and social life. Sheffield has five Nobel Prize winners among former staff and students and its alumni go on to hold positions of great responsibility and influence all over the world, making significant contributions in their chosen fields. Global research partners and clients include Boeing, Rolls-Royce, Unilever, AstraZeneca, Glaxo SmithKline, Siemens and Airbus, as well as many UK and overseas government agencies and charitable foundations.

For further information, or to speak with Dr De Vos or Dr Whitworth, please contact: