A team of engineering students from the University of Sheffield and neighbouring universities have successfully launched a self-made telescope 25km into space and captured images of the sun. 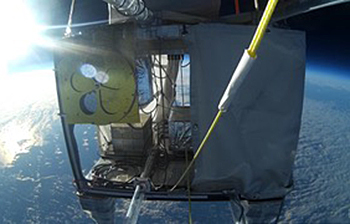 The telescope, dubbed Sheffield University Nova Balloon Lifted Solar Telescope (SunbYte), is the first of its kind and was designed and built from scratch by the team of 30 students in the UK.

The team of undergraduate, postgraduate and PhD students from the University of Sheffield launched the telescope on Friday 20 October from Kiruna, Sweden and captured images of the sun. These images were taken with the low cost telescope created using innovative techniques and costing just £25,000, instead of the usual million pounds in costs to create a telescope of this scale and intelligence.

Yun-Hang Cho, Team Leader of the project, said:"The SunbYte project was a fantastic opportunity for the students to work together, gaining actual real life experience of the aerospace industry and manufacturers, applying their scientific and engineering knowledge and networking with students and companies from across Europe. There were lots of challenges along the way, all of which made students grow and unite as a team."

The team, which included a range of international students from all over the world, spent almost a year designing, constructing and testing the telescope. The global collaboration supported the University’s #WeAreInternational campaign, designed to celebrate and highlight the importance of the UK’s diverse international student and staff communities.

The students described the project as a "once in a lifetime experience" and a "massive learning experience" that enabled them to put the skills they have mastered whilst studying into practice.

Godwin Okojie, a third year mechanical engineering student at the University of Sheffield said: "For me and the rest of the team, this was a truly incredible experience. To spend so long working on something that actually went into space is remarkable and something we are all so proud of. The entire team has worked tirelessly on this project ensuring every element of the telescope was perfect.

"We’ve all learnt so many skills that will help enable us to become the successful engineers of tomorrow. We put all the knowledge we have picked up studying engineering modules into real practice and learnt so much more along the way. All of us have matured as engineers during this project. The University of Sheffield encourages students to spread their wings, inspires autonomy and instils a real ethos in its students to get stuck in and experience what the engineering community has to offer outside of education."

The images the team captured will enable them to view and scientifically study solar images of the Sun. The project will also promote and encourage more young people to pursue space engineering studies.

Godwin added: "There were lots of challenges along the way, all of which made us grow and unite as a team. Some members of the electrical and software teams were unable to travel to Kiruna. This was problematic for us as many of the problems we encountered in Sweden were software and electronic related. But we all rallied round as team in order to keep us on track. We’ve not had a lot of sleep but it was all worth it – we are a very proud team."

Engineering at the University of Sheffield

Key facts about the project: