Researchers at the University of Sheffield have discovered a parasitic mite has caused the Deformed Wing Virus to proliferate in honey bee colonies. 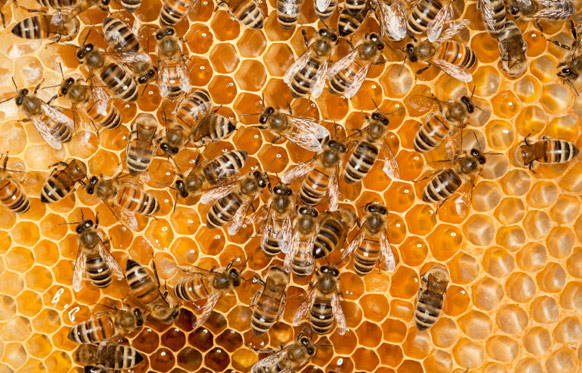 This association is now thought to contribute to the world-wide spread and probable death of millions of honey bee colonies. The current monetary value of honey bees as commercial pollinators in the United States alone is estimated at about $15-$20 billion annually.

The research conducted in Hawaii by researchers from the University of Sheffield, the Marine Biological Association, the Food and Environment Research Agency and the University of Hawaii, and reported in the journal Science, showed how the Varroa mite caused Deformed Wing Virus (DWV) – a known viral pathogen – to increase its frequency among honey bee colonies from 10 per cent to 100 per cent.

This change was accompanied by a million-fold increase in the number of virus particles infecting each honey bee and a massive reduction in viral strain diversity leading to the emergence of a single virulent DWV strain.

Dr Stephen Martin, of the University of Sheffield’s Department of Animal and Plant Sciences
said: “Just 2,000 mites can cause a colony containing 30,000 bees to die. The mite is the biggest problem worldwide for bee keepers; it’s responsible for millions of colonies being killed.

“Understanding the changing viral landscape that honey bees and other pollinators face will help beekeepers and conservationists worldwide protect these important insects. We have discovered what happens at the start of an infection. The goal is to understand how the infection comes about so that we can control it.

“Deformed Wing Virus is naturally transmitted in bees through feeding or sex but the mites change the disease so it becomes more deadly, shortening the bees’ lives."

As the mite and new virulent strain of the virus becomes established across the Hawaiian Islands the new emerging viral landscape will mirror that found across the rest of the world where the Varroa mite is now established.

This ability of a mite to permanently alter the honey bee viral landscape may by a key factor in the recent colony collapse disorder (CCD) and over-wintering colony losses (OCL) as the virulent pathogen strain remains even after the mites are removed.

The University of Sheffield invested £4 million in an environment research facility which has been purpose built for honey bee research and aligns to the central idea of Project Sunshine − to harness the power of the sun to tackle the biggest challenges facing the world today.