The inspirational coach behind Jessica Ennis' spectacular Olympic triumph was made an honorary Doctor of Letters at the University of Sheffield next week (15-19 July 2013). 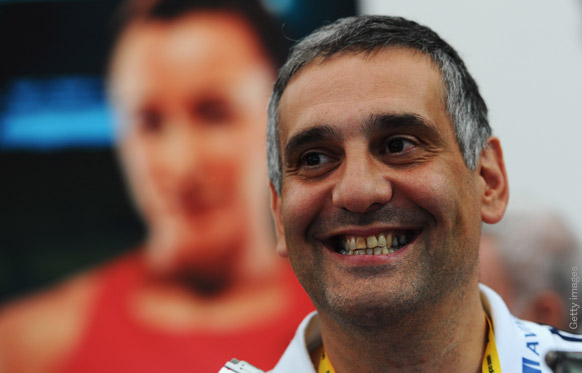 University of Sheffield alumnus and world-renowned athletics coach, Toni Minichiello, has worked with fellow Sheffield graduate Jessica Ennis for more than 15 years, helping to transform her raw talent into an Olympic heptathlon champion.

The father of one, who lives in Sheffield, was crowned Coach of the Year 2012 and was the only British athletics trainer to coach an Olympic gold medallist and double British record breaking performance at the London games.

"Receiving an honorary degree from the University of Sheffield is a great honour. It is wonderful to be recognised for coaching as sports coaches often go unrecognised in their achievements," said Toni.

"Being an alumnus of the University, and having always lived in the city, I am very attached to the institution so it will be a very proud moment for me to receive this honour."

After a phenomenal 2012 Toni is now working hard to prepare Jessica and the rest of his team for the World Championships which will take place in Moscow in August.

Jessica, who is now Jessica Ennis-Hill after marrying her childhood sweetheart Andy Hill back in May, will try to win back her world title which she lost to Russia's Tatyana Chernova two years ago.

Toni is one of 16 esteemed recipients who will receive their accolades alongside thousands of talented graduates from the University's Arts and Humanities; Engineering; Medicine, Dentistry and Health; Science; Social Science and International faculties. 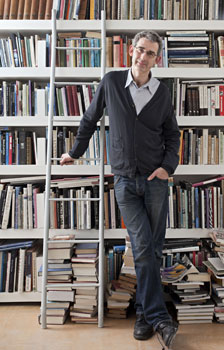 World-leading ceramics artist and author, Edmund de Waal, will also receive an honorary Doctor of Letters in recognition of his outstanding contribution to his field.

Edmund is best known for his large scale installations of porcelain vessels, with interventions at Waddesdon Manor, the Victoria and Albert Museum, Tate Britain and the Middlesbrough Institution of Modern Art (mima). He is also an award-winning writer and his family memoir, The Hare with Amber Eyes won international acclaim including the 2012 Costa Biography Award, and has been translated into over 20 languages.

Edmund received a Postgraduate Diploma in Japanese Studies from the University of Sheffield in the 1990s and received an OBE for services to art in 2011.

"Receiving this honorary doctorate from the University of Sheffield is an extraordinary moment for me," said Edmund.

"Sheffield is the city where I first worked by myself as an artist and writer. I loved its engaged energy¬-the ways in which the arts and the city tumbled together creatively.

"Studying Japanese at the University enabled me to return to Japan to write and make ceramics in a completely different way.

"Thirty years ago I decided not to study for a PhD but continue to make pots. But I am someone who loves research and believes in the ways in which art can work in the world, and I am so honoured that my alma mater should recognise what I have been trying to do."

Also receiving an honorary degree is University of Sheffield alumnus Simon Moran, owner and managing director of SJM Concerts – one of the largest UK-based concert promotion companies. He produced his first live music events in the Students' Union over 25 years ago and now works with global acts such as Take That, The Stone Roses and Beyoncé.

Professor Sir Keith Burnett, Vice-Chancellor of the University of Sheffield, said: "We are delighted to award these honorary degrees to 16 people who have made such a significant contribution to their fields.

"We are privileged that these national and eminent figures will be coming to the University of Sheffield to accept their honorary doctorates as they are excellent role models to our students and will help inspire them to soar to success."

To view a live stream of the graduation ceremonies taking place throughout the week visit http://www.shef.ac.uk/graduation/watch

Sir Bernard Hogan-Howe
LLD (Doctor of Laws)
Sir Bernard is the Commissioner of the Metropolitan Police. Born and raised in Sheffield, he joined South Yorkshire Police when he was 22, moving to Merseyside Police as Assistant Chief Constable of Community Affairs in 1997.

Emeritus Professor Tony Crook
LittD (Doctor of Letters)
Tony Crook has played a distinguished role locally, nationally and internationally in the field of Town and Regional Planning. He is an Emeritus Professor of the University of Sheffield and Chair of the Board of Trustees of the housing charity Shelter.

Martha Fajardo
LittD (Doctor of Letters)
A distinguished landscape architect and graduate of the University of Sheffield (Diploma in Landscape Design 1981), Martha Fajardo has established a formidable reputation for her work in her home country of Colombia where she also founded the Colombian Society of Landscape Architects.

Toni Minichiello
LittD (Doctor of Letters)
Athletics coach Toni Minichiello was born in Sheffield and is best known for his work with Sheffield’s own Jessica Ennis-Hill, creating a team of high performance sports practitioners and experts that led her to win a gold medal in the heptathlon in the London Olympics last year.

Kim Staniforth
LittD (Doctor of Letters)
A leading chartered accountant in Sheffield, Kim Staniforth has been involved with the Institute of Chartered Accountants in England and Wales throughout his career, and is a Fellow of the Institute. He is also a Freeman of the City of London and a Liveryman of the Worshipful Company of Chartered Accountants of which he was Master.

Simon Moran
DMus (Doctor of Music)
A Business Studies graduate of the University of Sheffield, Simon Moran is the owner and managing director of SJM Concerts, one of the largest UK-based concert promotion companies. He produced his first live music events in the Students’ Union over 25 years ago and now works with such acts as Take That, The Stone Roses and Beyoncé.

Bill Gibson
DEng (Doctor of Engineering)
An Electronic and Electrical Engineering graduate of the University of Sheffield, Bill Gibson established Zytek in 1981 to design and develop electronic fuel injection systems for racing cars and for very low volume road car manufacturers. The company is recognised as being at the heart of the high-performance automotive engineering sector in the UK.

Edmund de Waal
LittD (Doctor of Letters)
Edmund de Waal is one of the world’s leading artists working in ceramics today. He is best known for his large-scale installations of porcelain vessels, with interventions at Waddesdon Manor, the Victoria and Albert Museum, Tate Britain and mima.

The Rt Hon Richard Caborn
LittD (Doctor of Letters)
Richard Caborn grew up in Sheffield and trained as an apprentice at Firth Brown, where he helped build 4,000-tonne forging presses. Active in his trade union he subsequently entered politics, initially as an MEP and later representing Sheffield Central at Westminster. He was a minister in three departments of state, including acting as the longest-serving Minister for Sport.

Elizabeth Watts
DMus (Doctor of Music)
A former undergraduate in Archaeology and Prehistory at the University of Sheffield (2001), Elizabeth Watts is one of the foremost soprano singers of her generation. She came to prominence as winner of the Rosenblatt Song Prize at the BBC Cardiff Singer of the World in 2007 and has gone on to achieve international acclaim for her performances and recordings of the music of composers as diverse as J. S. Bach, Mozart, Schubert and Richard Strauss.

Professor Dame Athene Donald
DSc (Doctor of Science)
Professor Athene Donald DBE FRS is an eminent physicist, notable for her distinguished scholarship and outstanding contributions to the status of women in science. The first ever female Professor in physics or chemistry at the University of Cambridge in 1998, she received the Europe L’Oréal/Unesco Women in Science Award in 2009.

Professor Helen Storey
DSc (Doctor of Science)
Helen Storey is Professor of Fashion and Science at the University of The Arts London. Her visionary approach to fashion in the 1980s and 90s challenged traditional ideas about the images of women, pioneered industrial sponsorship and won awards for export and innovation. Her current work reflects a passionate commitment to exciting fusions between art, industry and science that push the boundaries of knowledge, engage the public in new, compelling ways, and challenge the social, cultural and artistic role of science.