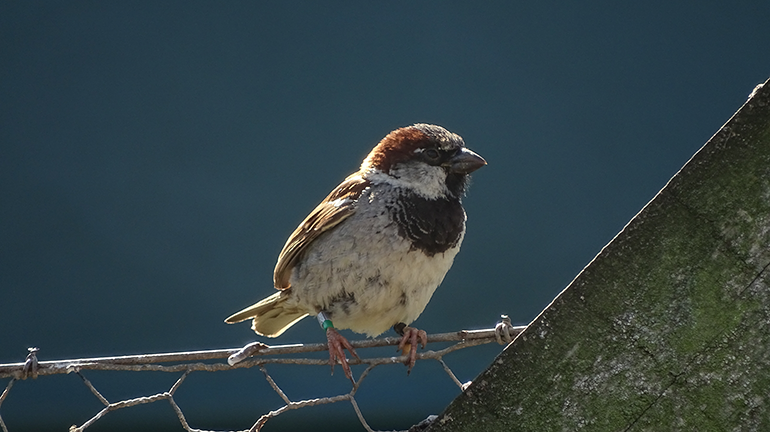 Scientists have debunked a common belief that the size of a male house sparrow’s bib - the black patch on their throat - signals his ability to fight and compete with other individuals.

For decades, it has been accepted that the sparrow’s bib is a badge of status - the bigger the bib, the higher in the social hierarchy.

Scientists in the 1970s called it the ‘status signalling hypothesis’. Researchers said the badge of status would evolve because fights - which commonly determine access to valuable resources such as food - are a risky business and being able to predict the fighting abilities of any potential competitor avoids unnecessary fights.

But the latest findings published in eLife contradicts those previous studies. In the paper, researchers from the University of Sheffield and the University of Bielefeld in Germany, among other research institutions, tested the status signalling hypothesis across populations of house sparrows by collecting data from several populations across the world including the USA, the UK, Hungary and Germany.

The study also reviewed all the published literature of previous studies testing the status signalling hypothesis in house sparrows.

Scientists then used a meta-analytic approach to quantitatively summarise all that is known about the status signalling hypothesis in house sparrows.

Despite the house sparrow being considered the textbook example of the status signalling hypothesis, researchers found most of these studies were based on limited sample sizes, and used inconsistent methodologies.

Professor Terry Burke, from the Department of Animal and Plant Sciences, at the University of Sheffield, said: “We are all susceptible to believing results that fit with a favoured theory. But this work again emphasises the importance to science of repeating and replicating earlier experiments and of the value of publishing all the outcomes of our investigations, including negative ones.”

Postdoctoral researcher, Alfredo Sánchez-Tójar, from the University of Bielefeld, said: “The key finding is despite the general belief; we found weak evidence that the bib of male house sparrows signals the fighting abilities of its bearer.

“Instead, we found that the published literature is a biased sub-sample, meaning that failures to replicate this hypothesis likely remain unpublished, a phenomenon known as publication bias.”

He added: “Our results show the need for abundant replication before we can robustly learn about what explains an observed phenomena.

“Our study also highlights some of the problems with the current scientific culture, where failures to replicate previous findings are generally deemed as uninterested, and thus, not often published, leading to biased conclusions across fields. We thus join the call for a change in incentives and scientific culture.”

Most of the studies testing the status signalling hypothesis in house sparrows are based on observational data. Scientists now want to conduct multiple robust experiments, preferably in different populations and laboratories.