Researchers at the University of Sheffield have found a potential new way to treat common and largely incurable inflammatory conditions like chronic obstructive pulmonary disease (COPD).

Normally when a person is injured or gets an infection, the body sends specialist white blood cells (neutrophils) to clean up the area, resulting in it becoming red and inflamed. The inflammation usually ebbs away over time but in certain diseases the inflammation remains, doing more damage to surrounding tissue.

Now scientists from the University of Sheffield may have found a solution using an ingredient found in traditional Chinese medicine which has inflammation reducing capabilities, giving it the potential to treat a range of diseases.

By screening drugs in zebrafish, researchers found a compound, Tanshinone IIA, which reduced inflammation, removing neutrophils by causing them to die at the wound and by moving them away from the wound - a completely new way to treat inflammation. The discovery has, for the first time, given scientists the opportunity to develop anti-inflammatory drugs which would not increase the risk of infection like current treatments. 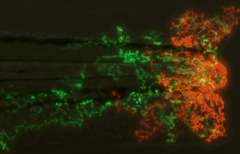 Professor Stephen Renshaw, from the University’s Department of Infection and Immunity, said: "Chronic inflammatory diseases are a major cause of illness and death worldwide and many of these, such as chronic obstructive pulmonary disease (COPD) are characterised by the persistence of inflammatory neutrophils. We believe targeting the neutrophil would be a new way to bring about healing in these conditions.

"Sending immune cells away from damaged tissue might be a good way to allow the damage to heal while still allowing those immune cells to protect us against infection."

Professor Renshaw said it was not known at the moment precisely how Tanshinone IIA helps white blood cells to migrate away from the wound but said research would continue.

He added: "Tanshinone IIA might be the first in a new class of drugs that allows us to tackle some devastating conditions, benefiting thousands of sufferers."

The research work was funded by the Medical Research Council (MRC) and the full paper will be published in the Science Translational Medicine journal.

For a full copy of the research paper please contact the press office.