With 2016 reportedly the warmest year on record, scientists have discovered insects are already feeling the effects of climate change, as a rise in temperature is shown to damage their ability to reproduce.

The study, conducted by researchers from the University of Sheffield, found that being exposed to mild heat as a juvenile negatively affects their chances of producing offspring as an adult. 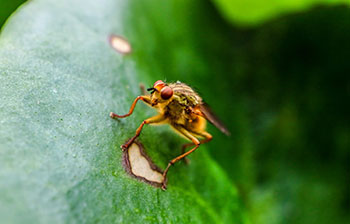 The research also revealed the extent of the negative effects varied depending on where the insect population is based. Insects which evolve in countries at low latitudes - such as Spain - cope better with above average temperature rises compared to those living at high latitudes, such as Sweden.

This means insects in high latitude countries are more vulnerable to climate change, which could lead to a decline in population.

Dr Rhonda Snook, lead investigator of the study from the University of Sheffield’s Department of Animal and Plant Sciences, said: “We already knew that insects are feeling the effect of climate change but we now know they are felt at much lower temperatures.

“Our study is unique as we only exposed the insects to mild heat but tested the long-term impact this had on them as both juveniles and when they reached adulthood. The results show that even small increases in temperature may still cause populations to decline because - while these insects don’t die because of the mild heat – they produce fewer offspring.

She added: “Juvenile insects are extremely susceptible to environmental changes as they don’t move around much because they are either larvae – like butterfly caterpillars - or they don’t yet have wings to fly away.”

The study, published in the Journal of Evolutionary Biology, was carried out on fruit flies and researchers strongly suspect the findings will be the same for other insects.

Dr Snook, who is a Royal Society Leverhulme Trust Senior Research Fellow, added: “We are now interested in finding out what genes differ between Spanish and Swedish populations that allow the Spanish flies to cope better.

“Identifying genes that are linked to increased and decreased reproduction is something which may be very useful not only in understanding how insects will cope with climate change but from the perspective of controlling insect pests.”