Prehistoric plants grown in state-of-the-art growth chambers recreating environmental conditions from more than 400 million years ago have shown scientists from the University of Sheffield how soil dwelling fungi played a crucial role in the evolution of plants. 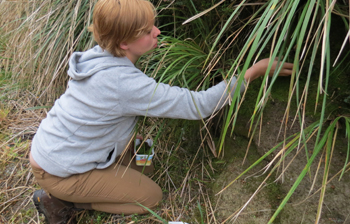 This ground breaking work provides fundamental knowledge of how plants colonised the land before roots evolved and the co-evolution of one of the most ancient relationships, between fungi and early plants that played a founding role in the evolution of Earth’s ecosystems.

The research highlights the importance of mutually beneficial plant-fungal relationships prior to the evolution of roots, whereby plants gain growth-promoting soil phosphorus from the fungi in exchange for sugars fixed by the plant through photosynthesis.

The study compared the efficiencies of plant-fungal relationships in land plant species spanning more than 400 million years of evolution under both modern day atmospheric conditions and CO2 concentrations on Earth at the time plants first emerged onto the land.

Lead author Dr Katie Field, of the University’s Department of Animal and Plant Sciences, said: "Our research shows for the first time how Earth’s terrestrial ecosystems were initiated in partnership with soil dwelling fungi nearly half a billion years ago and how these fungi played a crucial role in enabling plants to diversify into fantastically rich and biodiverse modern floras. 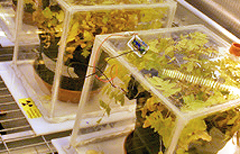 "The earliest land plants not only faced ever increasing competition for light with the evolution of new, taller species of plants, but also experienced reduced fungal symbiotic efficiency and subsequently lower total capture of phosphorus as global atmospheric carbon dioxide levels fell.

"In contrast, the fungal symbiotic efficiency of the more sophisticated, recently evolved land plants with complex organs such as leaves and roots, increased as CO2 levels decreased.

"This would have given them a significant evolutionary advantage and has led to their dominance of world ecosystems today."

Dr Field added: "Our exciting findings clearly indicate that the co-evolution of complex plant rooting systems and fungal symbioses, against a background of falling atmospheric carbon dioxide, resulted in increased symbiotic efficiency and as such, ensured the success of plants in ‘greening the Earth’ and their ensuing diversification, creating the wonderfully varied terrestrial ecosystems that we are familiar with today."

Department of Animal and Plant Science