President and Vice-Chancellor of the University of Sheffield Professor Sir Keith Burnett was today (15 December 2017) invited to attend the launch of the Future Lab at China's leading Tsinghua University.

The Future Lab is an interdisciplinary facility inspired by the Media Lab at Massachusetts Institute of Technology in the US and uses the latest technologies to foster collaborations with maximum support for creativity and innovation, focusing on relevance to the economy and wider society. 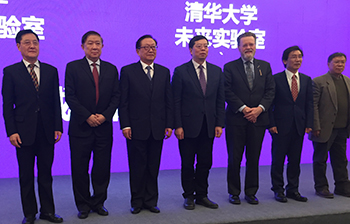 The high-profile launch was attended by the Chinese Vice-Premier, Minister for Science and Technology, Vice-Minister for Education, President and Vice-Presidents, as well as the Directors of Microsoft, Samsung and Apple.

Earlier the Vice-Chancellor visited the Beijing Research Institute for power batteries in electric cars and held a private meeting with Fei-Fei Li, the Head of Google Artificial Intelligence (AI) globally, who is from China, who is known for her commitment to human-centred development of AI technologies.

Sir Keith said: "It is a genuine privilege to spend time in China and to learn more about the superb research which is taking place in areas of global challenge such as sustainable transport and artificial intelligence.

"What I am learning here is directly relevant to the leading research in our University and we are taking the opportunity to develop agreements for future research partnerships, student and staff exchange and potentially also shared teaching through initiatives such as our MindSphere Lounge and Education 4.0. This has been reinforced by strong support from the Chinese Ministries of Industry and Education, reflecting our longstanding commitment to working positively with Chinese scholars and industry in shared problems for the good of all."

During his week-long visit, the Vice-Chancellor also made an agreement with the President of China's leading Beihang University to work together on artificial intelligence and manufacturing.

Beihang University, previously known as Beijing Aerospace and Aeronautical University, was founded 65 years ago by merging the aviation departments of eight leading Chinese universities to support the development of aviation. It has since become the top university in China for research funding per faculty member and has particular strengths in engineering materials, AI and science. It has the largest single teaching facility in Asia.