A field in Sheffield on the route of this year’s British leg of the Tour de France has been marked with a giant image of a cycle to celebrate the work of a Nobel Prize winning academic from the University of Sheffield. 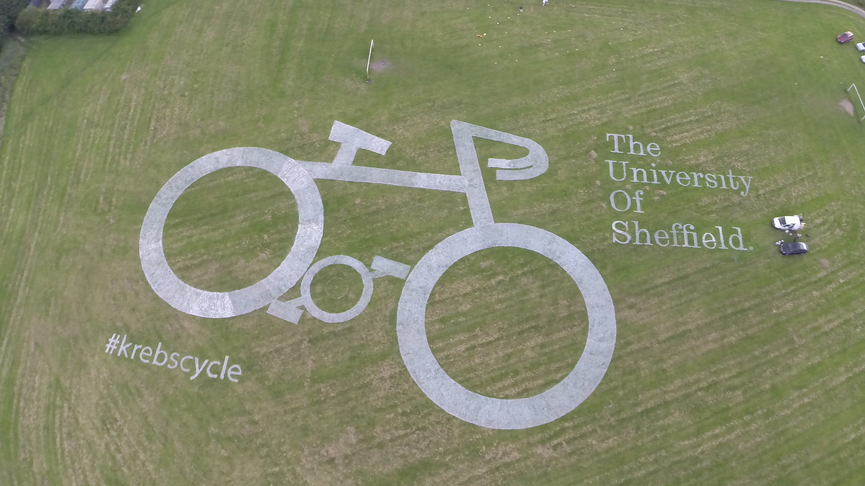 The Krebs Cycle, named after the University’s late biochemist, Professor Sir Hans Krebs, plays a central role in modern understanding of the way the body metabolises nutrients and converts them into energy.

The Krebs Cycle is the most important energy production system in the human body. It is a series of enzymatic reactions that catalyses the aerobic metabolism of fuel molecules to carbon dioxide and water, thereby generating energy for the production of adenosine triphosphate (ATP) molecules.

Dr Matt Johnson, Fellow of the Krebs Institute at the University of Sheffield, said: “Unlocking the secrets of the Krebs Cycle has revolutionised our understanding of metabolism allowing the nutrition of the cyclists involved the Tour De France to be best tailored for optimal athletic performance.

“This is essential for the cyclists competing in the Tour who are expected to burn 123,900 calories over the 22 day competition. Without such knowledge of metabolism, the Tour de France would be a far more leisurely event.”

To illustrate the process, the University has created a giant bicycle in a field near the route of the Tour. The bicycle has been drawn using almost 1,700 litres of eco-friendly paint and is over 100m in length. In an aerial video, school children play the part of molecules in a re-enactment of way the Krebs Cycle works on the field.

The working model is trillions of times the size of the actual Krebs Cycle, which takes place constantly inside most cells of the human body.

Dr Johnson added: “In a way we have billions of elite cyclists built into our bodies, keeping us moving, powering our thoughts, our organs and our limbs. Understanding how this works was a Nobel Prizewinning breakthrough and it’s fantastic that we are able to celebrate Professor Sir Krebs as today’s elite cyclists power past the site.”

The Krebs Cycle was discovered in 1937 by Professor Sir Hans Krebs while working at the University of Sheffield. In 1953, Professor Sir Krebs was awarded the Nobel Prize in recognition of his discovery. 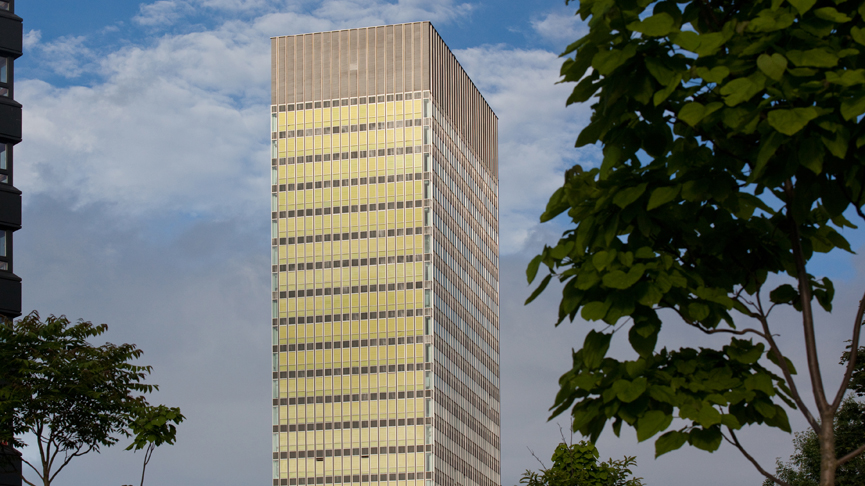 Meanwhile, the University of Sheffield has today (4 July 2014) turned its iconic Arts Tower yellow to celebrate the Tour’s arrival in Yorkshire.

All 1,800 windows of the UK's tallest university building have been transformed into a giant yellow jersey using 8,000 sheets of paper.

Staff from the University, Signs Express (Sheffield) and volunteers from the Sheffield Children's Hospital Charity worked through the night to turn the 20-storey building into a sea of yellow.

“Many of our staff and students are committed cyclists, and we have also encouraged a wide range of cultural and educational activities relating to this high-profile event.

“The fact that one of our most iconic buildings will be a visible form of welcome to the Tour is a reflection of our wider delight that Yorkshire will be hosting such a tremendous international event."

You can watch a video of Dr Matt Johnson explaining Krebs, his discovery and its role in endurance sports, here: http://www.deconstructingthetour.group.shef.ac.uk/krebs-cycle/